Tango with Putin (aka: F@ck this Job) Screening and Panel Discussion 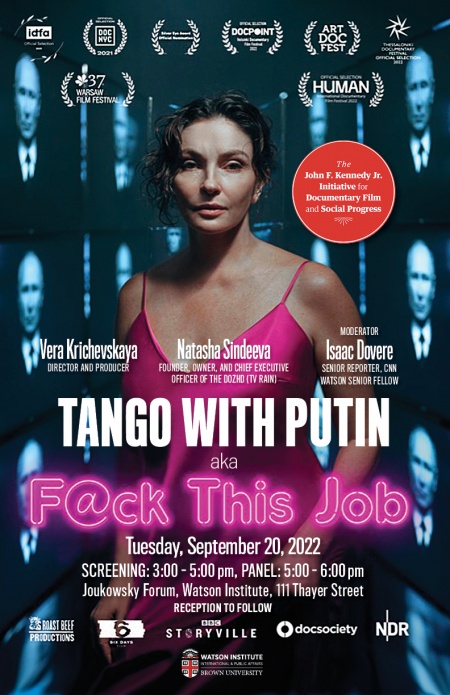 Join the Watson Institute's John F. Kennedy Jr. Initiative for Documentary Film and Social Progress for a discussion with the director and producer Vera Krichevskaya and Natasha Sindeeva, founder, owner, and chief executive officer of the Dozhd (TV Rain).

Tango with Putin is a documentary about Russian television station Dozhd (aka TV Rain). Conceived as a funky lifestyle channel by owner Natasha Sindeyeva, TV Rain provoked constant governmental ire with its courageous dedication to independent and critical reporting. For 12 years TV Rain was the only independent news TV station in Russia. Originally titled “F@ck This Job” (heard blurted by a reporter at a tumultuous Ukraine demonstration), the film is directed by Vera Krichevskaya, once a producer at the station, who reveals how TV Rain suffered threats, cyberattacks, evictions, and designated a “foreign agent” by the Kremlin. TV Rain was shut down by the Russian state on the 6th day of the war in Ukraine, on March 1st, 2022. This is an exceptional story about two tenacious, female founders, truthtellers and leaders.

Natasha Sindeeva is a founder, main owner and chief executive officer of the Dozhd (TV Rain) Media Holding, which includes Dozhd TV (TV Rain) and the Republic.ru online magazine. Co-founder and former general producer of the Silver Rain radio station, founder of the Silver Galosh anti-award. Three times laureate of the "Media Manager of Russia" prize, honorary academician of the Russian Academy of Radio.  In 2016, Sindeeva became a laureate of the Moscow Helsinki Group Prize for the Protection of Human Rights.

Vera Krichevskaya is a co-founder of Dozhd TV (TV Rain) and an award-winning television director and producer who has held numerous roles at NTV Channel, ICTV Channel and 24DOC TV. Her feature documentaries include “F@ck this Job”, "The Citizen Poet," "The Man Who Was Too Free," and "The Case" ("Delo Sobchaka"). In 2013, Vera was a World Press Institute Fellow.