Voting Rights at a Crossroads 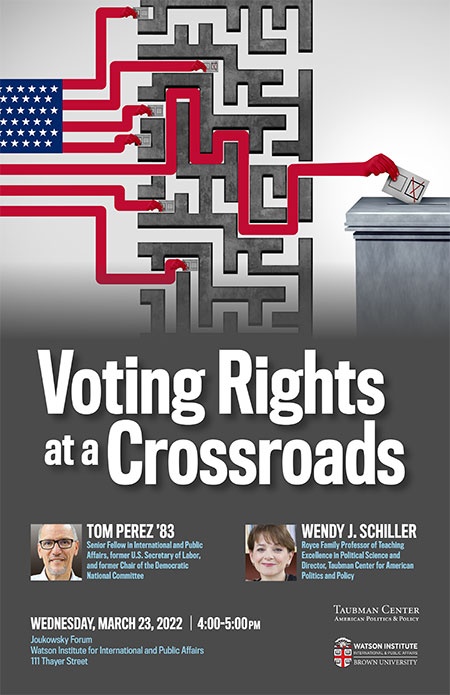 Join Wendy Schiller, director of the Taubman Center for American Politics and Policy for a conversation with Watson Senior Fellow Tom Perez '83 about voting rights and the aftermath of the Senate's failure to pass the Freedom to Vote: John R. Lewis Act.

In 2017, Perez was elected as Chairman of the Democratic National Committee and served in that role until January 2021.

Wendy Schiller is Professor of Political Science, Professor of International and Public Affairs, and Director of the  A. Alfred Taubman Center for American Politics and Policy at Brown University. She did her undergraduate work in political science at the University of Chicago, served on the staffs of Senator Daniel Patrick Moynihan and Governor Mario Cuomo, and then earned her PhD from the University of Rochester. After fellowships at the Brookings Institution and Princeton University, she came to Brown in 1994. She teaches popular courses titled The American Presidency, Introduction to the American Political Process, and Congress and Public Policy.