Why Democracy Matters: A Conversation with Ambassador Derek Mitchell 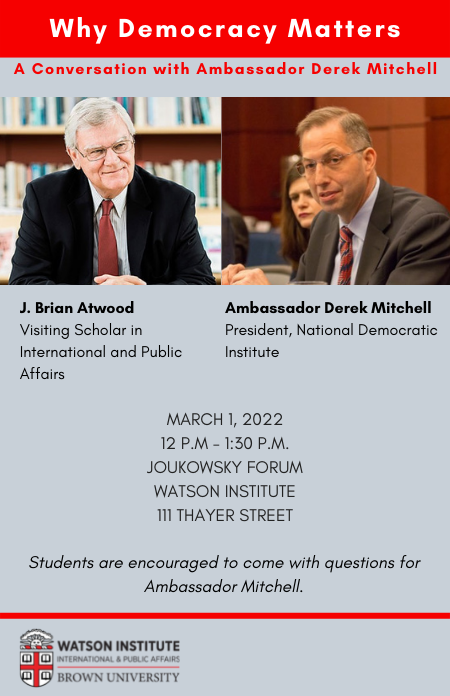 Ambassador Derek Mitchell is the President of the National Democratic Institute for International Affairs. He served as Ambassador to Myanmar (Burma) during the Obama Administration and has closely followed events in that country after the military coup against the party of Aun San Suu Kyi. Mitchell worked with the White House on the Democracy Summit held in December, and NDI is engaged in the follow-up work. Mitchell and NDI worked in Hong Kong just before the crackdown to promote candidates for local council seats who supported democracy. After democrats won the vast majority of those seats, NDI's office was closed by the authorities. He led the effort to evacuate some 250 NDI staff and families from Afghanistan and is watching events in Ukraine where NDI has an office. He will discuss the competition between democracy and autocracy and the elements that underscore "Why Democracy Matters."

Ambassador Mitchell will be in conversation with J. Brian Atwood, Visiting Scholar in International and Public Affairs at the Watson Institute. Atwood led the U.S. Agency for International Development (USAID) during the Administration of President William Clinton. He earlier led the Clinton-Gore transition team at the State Department in 1992, and was Under Secretary of State for Management prior to his appointment as head of USAID.