Will the Invasion of Ukraine Lead to Nuclear War? What we can do about it 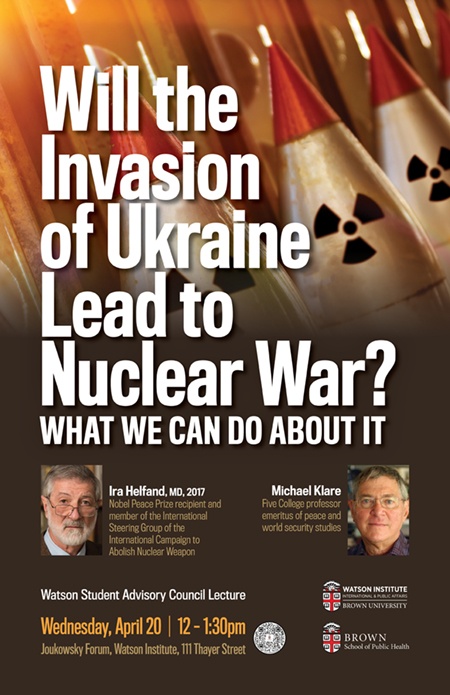 Lunch will be available.

Join Dr. Ira Helfand and Dr. Michael Klare as they weigh in on the threat of nuclear war amid the Russian invasion of Ukraine. Learn about the historical, diplomatic, and political contexts of a potential nuclear war and the associated medical and humanitarian consequences. Find out how to get involved with the growing “Back from the Brink” movement in the United States and the larger international movement to abolish nuclear weapons. Audience Q&A is encouraged.

Presented by the Watson Student Advisory Council. Cosponsored by the School of Public Health.

Michael Klare, Five College professor emeritus of peace and world security studies, and director of the Five College Program in Peace and World Security Studies (PAWSS), holds a B.A. and M.A. from Columbia University and a Ph.D. from the Graduate School of the Union Institute. He has written widely on U.S. military policy, international peace and security affairs, the global arms trade, and global resource politics.

Klare serves on the board of the Arms Control Association and advises other organizations in the field.

Ira Helfand, MD is a member of the International Steering Group of the International Campaign to Abolish Nuclear Weapon, ICAN, the recipient of the 2017 Nobel Peace Prize, and Immediate Past President of the International Physicians for the Prevention of Nuclear War, the founding partner of ICAN and itself the recipient of the 1985 Nobel Peace Prize. He is also co-Founder and Past President of Physicians for Social Responsibility, IPPNW’s US affiliate. He is active in the Back from the Brink campaign. Dr. Helfand was educated at Harvard College and the Albert Einstein College of Medicine. Dr. Helfand co-authored PSR’s report, Nuclear Famine: 2 Billion at Risk?, which outlines the global health consequences of regional nuclear war. He was a leading medical voice in ICAN’s campaign for the Treaty on the Prohibition of Nuclear Weapons. Dr. Helfand addressed government delegations at international conferences on the Humanitarian Impact of Nuclear Weapons in Oslo, Norway, Narayit, Mexico, and during the May 2016 U.N. Open-Ended Working Group on disarmament in Geneva, and throughout the U.N. General Assembly negotiations in 2017.