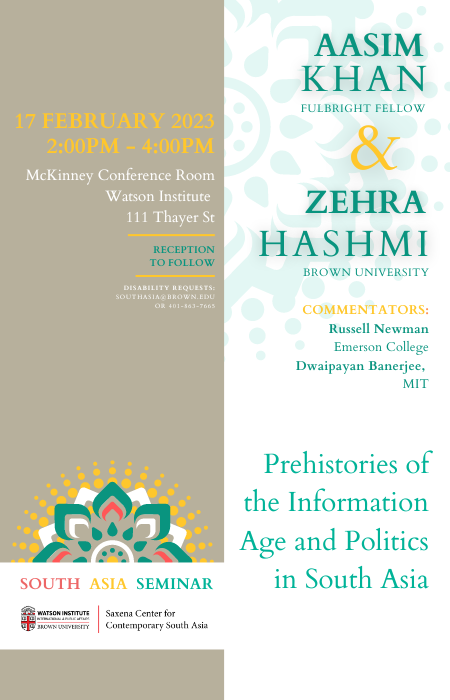 Zehra Hashmi/ Making the Individual: Politics of Information and Identification in 1970s Pakistan

This talk explores the history of a state-led information infrastructure directed at identifying individuals in Pakistan. Pakistan’s first paper-based national identity registry—built after the creation of Bangladesh in 1972 and in the context of an intensifying Cold War in the region—presents a transformation in bureaucratic approaches to information. Specifically, during this period, information about kinship came to be retooled for governance and control over an unknowable population. How and why did the Pakistani state begin to “individuate” its population by collecting data about families? What kind of individual was produced out of this new “kinned” information infrastructure? Such a configuration of individuating practices presents a departure from earlier (informational) governance strategies that were primarily reliant on classificatory schemas—most prominently, the colonial census and its enumeration of caste and tribe as identity categories. To make this argument, this talk will delve into both the interconnections and disjunctures between caste, tribe and kinship to then focus on how conceptions of each of these social formations was refracted through the newly created information systems in 1970s Pakistan. In so doing, it will foreground the tension between classificatory schemas and individuating technologies in the realm of informational control.

Aasim Khan/ Small Politics of Big Tech: Democracy and the quest for global justice in the information age

With information technology becoming an engine of capitalism in the late 20th century has also led to a serious debate on the impact of these changes on the economies and societies beyond the Western world. In this talk I discuss the early moment which saw the problem being defined in terms of a 'New World Information Order’ and discuss how local politics and institutions that framed India's own democracy also informed its agenda on information access and inequality. I revisit this moment to rethink the theory of capitalism and democracies in the global South, particularly in a large democracy like India and explain the local factors which influence its agenda, particularly by disrupting efforts by its leaders to transcend locality by moving the debate to the international level. In evoking this interplay between locality, nation and the international, I argue that against the conventional wisdom about the expansion of Big Tech capitalism and its Western origins. Exploring the debates ranging from the regulation of global satellite communication to norms for data protection, I would argue that rather than resolve them entirely from the top via global taxation, many local institutions also need to be developed that can enable democracies to address the outcomes at the local levels. India’s case is significant because the contestation around the New World Information Order coincided with the brief and significant 'Emergency rule’ that saw democratic norms suspended entirely. It thus provides a unique vantage point to rethink the current moment when those seeking to curtail the power of ascendant capitalism are once again hoping to bypass local distinctions in their quest for global justice in the information era.