Bidenomics and Climate Action: The Case of the Inflation Reduction Act 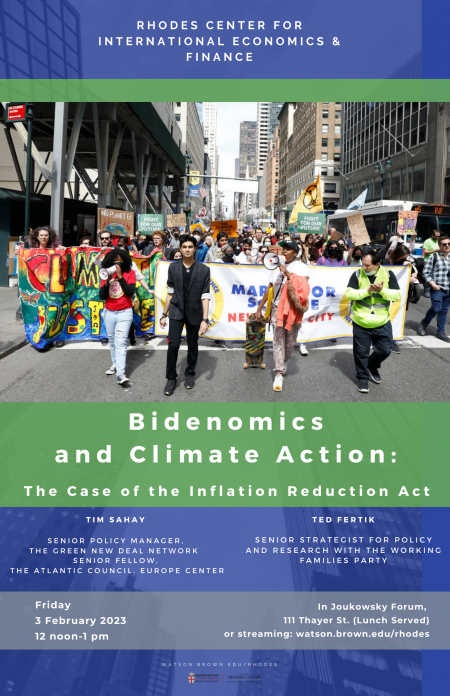 The United States is the largest producer of oil and gas in the world. It has a welfare state that is riddled with holes and leaves vulnerable people behind. We have infamously never ever passed a climate bill due to the power of Big Oil and fossil-dependent states. We have not had active industrial policy in generations. The failures of the neoliberal era, ratcheted up by Covid and Trump, brought our political system to the brink. Bidenomics, labor and grassroots movements pushing and shaping it from the left, sought to alter this trajectory, and climate action was at the center of it. How did this effort to transform the US economy fare in its confrontation with the US political system? What can we learn about the political economy of the United States from this pivotal case?

Tim Sahay, PhD Physics MIT. Senior Policy Manager, Green New Deal Network and Senior Fellow, Atlantic Council, Europe Center. Tim has worked over the past decade across physics, cleantech, climate adaptation & consulting. While doing a PhD in Physics at MIT, he organized the campus fossil divestment movement. As the Blue-Green Cities fellow at the Charles River Watershed Association, he organized housing advocates to lobby for climate resiliency in Boston. He has worked as a consultant on projects ranging from pollution in India to energy transition in China. He is currently the senior policy manager at Green New Deal Network, a coalition of labor, climate and environmental justice organizations growing a movement to pass national and international green policies. He has advised Congressional offices designing investment, trade,procurement, and industrial policies that simultaneously create good jobs, address climate change, curb racial and economic inequity. His research interests are industrial policy and energy politics. Originally from Mumbai, he is based in New York City.