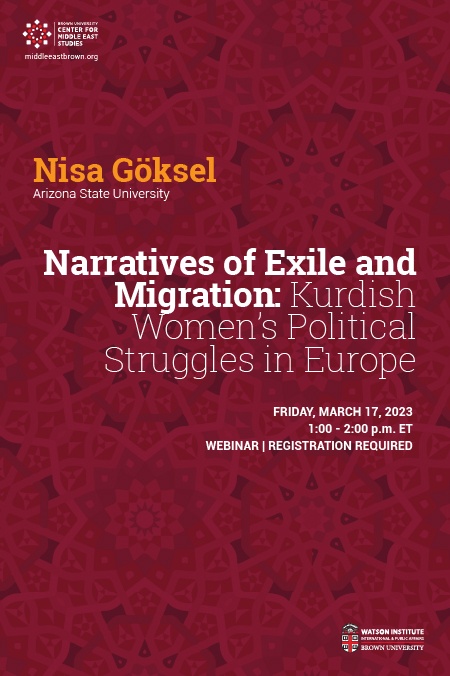 The lives of politically active Kurdish women take shape at the intersection of migration and exile, and this talk explores how the conditions of displacement and ongoing war in Turkey’s Kurdistan region affect Kurdish women’s struggles in Europe as migrants and political subjects. Based on interviews and participant observations in Germany and France, Nisa Göksel will examine the political subjectivities and activities of Kurdish women from a transnational perspective by considering the question of how they strive to sustain their political ties and agency despite the daily difficulties of migrant/exile life.

War, displacement, and statelessness have forced the Kurdish community to maintain its political struggle beyond the territorial states located in the Middle East, while governments in both Europe and the Middle East see the dispersed Kurdish body politic as a major “threat” to the territorial sovereignty of their states. In this context, Kurds have formed a movement across borders against the transnational regimes of war and violence that have constituted the very foundations of their displacement and de-territorialization. Like the Kurdish movement as a whole, Kurdish women face a political and existential struggle of a transnational character, encompassing the sites where Kurds live beyond the Middle East. In her talk, Göksel will approach the position of Kurdish women in the diaspora and their identities as “liminal.” This position lies between their past and present political experiences, and between their revolutionary ideals and their family life in the tenuous terrain of migration/exile.

Nisa Göksel is an assistant professor of sociology in the School of Social and Behavioral Sciences at Arizona State University. She holds a Ph.D. in Sociology from Northwestern University, with a graduate certificate in Gender and Sexuality Studies. Her areas of research are gender and sexuality; feminist and women’s movements in the Middle East; war, violence and peace-making; and migration, displacement and diaspora studies.