But What About the Jobs? Mapping the Path from a Militarized to a Green Economy 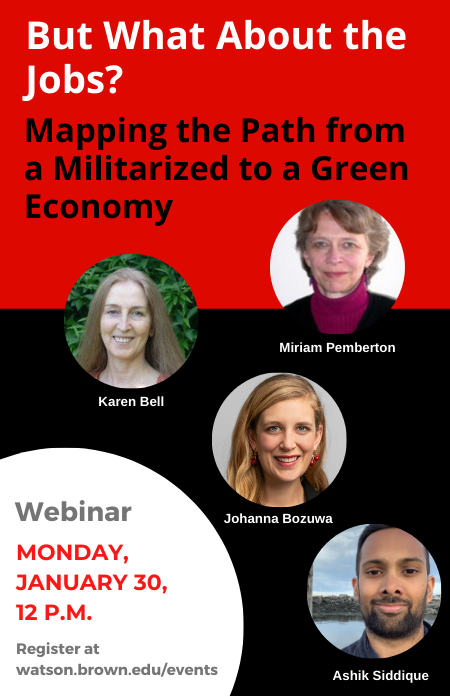 The U.S. economy is inextricably linked with industries that produce weapons of war and harm the environment. Discussions of scaling back these industries inevitably lead to threats or fears of lost jobs. But what if the economy was not so dependent on militarism and fossil fuels? What might it look like to transition to a green economy and away from the stranglehold of military manufacturing?

Pemberton and Bell will discuss their findings. They will be joined by Johanna Bozuwa, Executive Director of the Climate and Community Project, whose research focuses on a just transition away from fossil fuels. The conversation will be moderated by Ashik Siddique of the National Priorities Project.

Miriam Pemberton has studied the U.S. military economy and the means of shrinking it down to size for decades, first as Director of the National Commissionfor Economic Conversion and Disarmament and then as a Research Fellow at the Institute for Policy Studies. With Lawrence Korb, she headed the task force that for most of a decade produced the annual "Unified Security Budget of the United States." With William Hartung she edited Lessons From Iraq: Avoiding the Next War (Paradigm, 2008). She has just published Six Stops on the National Security Tour: Rethinking Warfare Economies (Routledge, 2022). She holds a PhD from the University of Michigan.

Johanna Bozuwa is the Executive Director at the Climate and Community Project, a progressive climate policy think tank. She directs the network of researchers and experts to develop crucial and justice-based climate policy. Her research focuses on extraction and fossil fuels, energy justice and democracy, and the political economy of transitions.

Ashik Siddique is a research analyst for the National Priorities Project, working on analysis of the federal budget and military spending.