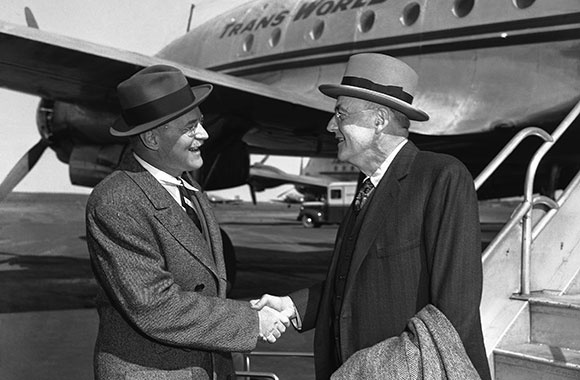 John Foster Dulles (right) is greeted by his brother Allen Welsh Dulles on his arrival at LaGuardia Field in New York City in 1948. Jacob Harris/AP

"Americans don’t like to understand things. We like to do things. The Dulles brothers exemplified that when they were in power. And we exemplify that by having forgotten them."

How two brothers controlled a decade of US foreign policy

Why does America behave as it does in the world? This is the question that award-winning New York Times foreign correspondent, author, and visiting scholar Stephen Kinzer has spent much of his career—and several books—trying to answer. His most recent project is a biography of two towering, albeit forgotten, figures in mid-century US foreign affairs: the brothers John Foster and Allen Dulles. John Foster Dulles served as Secretary of State from 1953 until his death in 1959. Allen Dulles headed the CIA from 1953 to 1961. As leaders of both the overt and covert foreign policy agendas of the Eisenhower administration, the two brothers responded to perceived Cold War threats with interventionist zeal, orchestrating coups against democratically elected leaders in Guatemala, Iran, and the Congo. They embodied and codified a worldview about America’s global role that shaped the course of the twentieth century. But for reasons of great interest to Stephen Kinzer their legacy has been almost completely “airbrushed out of history.” His book, The Brothers: John Foster Dulles, Allen Dulles, and Their Secret World War, is an effort to undo that airbrushing, to make them visible—in all their ugliness—so that we might finally “learn from their mistakes.”

“Probably when they were in power, there was hardly a literate human being on earth that did not know the name Dulles,” Kinzer told a standing-room-only crowd at the Institute last week. Now when people hear the name Dulles they think of the airport, if anything. Indeed, Washington’s Dulles Airport was named after the older brother, John Foster, in 1962. When it was dedicated, a bust of the former Secretary of State was placed at the airport’s center beside a reflecting pool. But when Kinzer went to see the bust at the start of his book project, no one could tell him where it was. Eventually a guard from the Metropolitan Washington Airports Authority unlocked a conference room next to baggage claim carousel #3: there was the bust, beside, Kinzer writes, “plaques thanking the Airports Authority for sponsoring local golf tournaments.” For Kinzer, the quiet closeting off of Foster Dulles’s visage at the airport that bears his name is “a wonderful metaphor” for the way history has treated him and his brother.

Why have we forgotten the Dulles brothers? Because, Kinzer says, “their approach to the world didn’t work out well for us.” Remembering them is “unpleasant and complicated” because in doing so, we must confront one of America’s ugliest legacies: our history of undemocratic intervention, of violating the sovereignty of less powerful nations to serve our strategic and economic interests, and of doing so with very little understanding of its long-term impact. “Americans don’t like to understand things,” Kinzer observes. “We like to do things. The Dulles brothers exemplified that when they were in power. And we exemplify that by having forgotten them.” To see the Dulles brothers, Kinzer suggests, is to see ourselves.

Indeed, Kinzer contends, “They embodied a view of the world that we have continued to follow.” In the course of his research, Kinzer noticed something he had overlooked for decades: a motto inscribed above the emblem of the Council on Foreign Relations, of which the Dulles brothers were founding members. “I’ve seen that logo,” says Kinzer. “It’s on every issue of Foreign Affairs magazine, but it hadn’t registered with me before.” The motto, the guiding principle of America’s most influential foreign-policy think tank, is a single Latin word, ubique—everywhere. “This,” says Kinzer, “is the answer to many questions the Dulles brothers asked or were asked [during their time in power]: Where does the United States have absolutely vital interests? Where does the United States have to be involved? Where does the United States have to control the course of events?” Ubique.

Having answered in this way, the Dulles brothers had no qualms about employing the secret machinery of Allen Dulles’s CIA to depose foreign leaders who appeared to jeopardize America’s interests. Kinzer’s previous books, All the Shah’s Men and Bitter Fruit, investigated the US-backed removal of Iran’s Mosaddeq and Guatemala’s Arbenz, respectively. These books, and his most recent, on the Dulles brothers, are animated by an effort to uncover the hidden histories of the present, and especially America’s nefarious role in shaping those histories.

By way of explaining his commitment to that endeavor, Kinzer described a particular scene from Frank Capra’s 1944 dark comedy, Arsenic and Old Lace. In the film, Cary Grant goes to visit his elderly aunts at their boarding house and discovers, to his horror, that his aunts are gradually killing off the men who live there. Kinzer recalls the scene where “one of these lovely aunts says, ‘the gentleman died because he drank wine that had poison in it.’”

Exasperated, Cary Grant responds, “but how did the poison get in the wine?”

“It is to answer this question,” says Kinzer, “that I have devoted my whole career.”