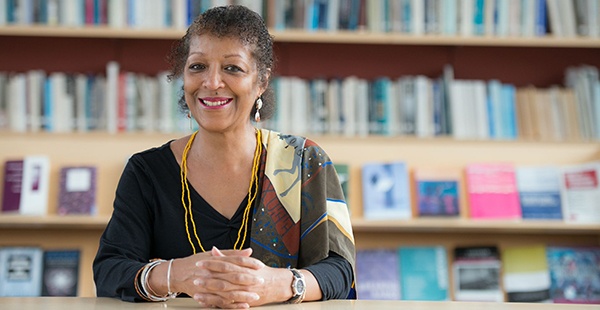 Areas of Interest: Local/indigenous knowledge systems, colonial sciences, environmental studies, and the politics of knowledge in Africa and the African Diaspora, Science and technology policy and national systems of innovation in the Global South, Black transnationalism and history of black resistance (USA, Africa, Brazil), Transformation of higher education systems, Communities-of-practice, epistemologies of practice, and organizational cultures, International development in Eastern and Southern Africa.

Geri Augusto is a visiting associate professor of International & Public Affairs and Africana Studies, a faculty associate at Brown’s Center for the Study of Slavery and Justice (CSSJ), and also teaches in the Science and Society Program.  A Watson Faculty Fellow, Augusto is currently part of Watson's Brazil Initiative, and also serves on the working group for Brown’s new Native American and Indigenous Studies (NAIS) program.  Augusto earned her BA in economics from Howard University, MPA from Harvard Kennedy School and Ed.D. from George Washington University. Her chief interest is in how knowledge gets created and practiced in contexts where there is human difference without equality. Other interests include higher education, indigenous knowledges and science, technology and innovation policies in the Global South; radical black transnationalism; and how visuality, orality and new digital media resonate in the creative expressions, knowledge-making practices, and social movements of Afro-descendant and indigenous communities.

Between 2009 and 2014, Augusto co-convened three successive Critical Global Humanities Institutes of the Brown International Advanced Research Institutes (BIARI), as well as co-convened two editions of the engineering and society BIARI, Connections and Flows: Water Energy and Digital Information.  From 1994 to 2002, Augusto taught public administration and public policy full-time at the Harvard Kennedy School.

In Brazil, she is currently a member of the scholarly collective Traduzindo no Atlantico Negro (Translating in the Black Atlantic) based at the Federal University of Bahia-UFBA, supervises several post-graduate students there in African diasporic literatures and translation studies, and collaborates with the Salvador-based Steve Biko Cultural and Educational Institute.  At the Biko Institute, Augusto helped establish and taught in the Kwetu Leadership Institute for black and women's social movements in the northeast region of Brazil.  She has also taught several short courses at the Center for Study of Afro- and Indigenous Peoples-CEPAIA at the State University of Bahia-UNEB, and is part of the working group at UNEB awarded funding under Brazil’s Abdias Nascimento Academic Development Program for the humanities. As a Fulbright Scholar in Brazil 2013-2014, Augusto researched how some quilombola (maroon) communities and institutions in Bahia state are using, thinking about, and resignifying new digital media, and she continues to collaborate with the Escola das Águas of the Artisanal Fisher Movement (MPP-Bahia) in Bahia state.

Augusto is also on the board of the Student Nonviolent Coordinating Committee (SNCC) Legacy Project, as well as on the editorial board for the new SNCC Digital Gateway, in partnership with Duke University (www.snccdigital.org ). Within this project, she has a particular interest in how the US southern freedom struggle/civil rights organization influenced international policy and affairs in the 1960s and 1970s.

As part of her ongoing work on on indigenous and subjugated knowledges, Augusto has created several research-based visual essays.  These include a seed assemblage and symbolic slave garden at the Center for the Study of Slavery and Justice at Brown; an exhibition on the Caribbean gardens of the enslaved in Miami; and a mixed-media assemblage imagining the tension between Rhode Island-made “negro cloth” and the beliefs and practices of the enslaved, exhibited at the University of Rhode Island.

From 1973 to 1991, Augusto worked in southern Africa as a book editor (Tanzania) and as a project economist and technical editor for the Southern African Development Community-SADC Energy Sector Technical Unit in Angola. She also worked as a Portuguese/English translator for a variety of ministerial, Frontline states, and United Nations meetings in southern Africa and Europe. Since 1994, Augusto has collaborated on numerous public policy projects in the South African science and technology, higher education, and indigenous knowledge sectors, including the National Commission of Higher Education; the System-wide Review of Science, Engineering and Technology Institutions; and the First National Workshop on Indigenous Knowledge Systems. Her latest South African collaborations include teaching in a new doctoral summer school for higher education instituted by the University of the Western Cape and Edouardo Mondlane University (Mozambique), and working with colleagues at the University of Johannesburg on a new portal for study of Indigenous Knowledges.