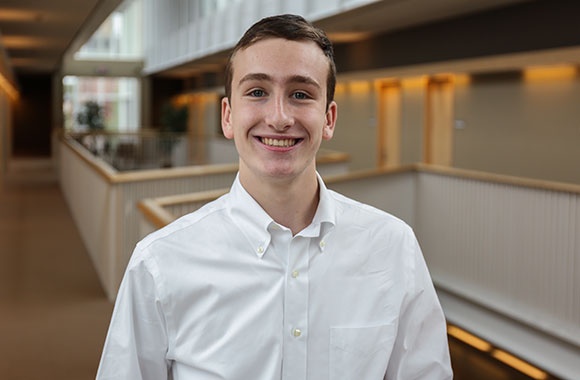 "In today’s world, I think it is extraordinarily important to focus on the overlap between the international and domestic spheres. The IAPA concentration allows one to examine and understand how these areas influence each other."

You are pursuing the new Watson concentration, International and Public Affairs. Why are you interested in the concentration?

In today’s world, I think it is extraordinarily important to focus on the overlap between the international and domestic spheres. The IAPA concentration allows one to examine and understand how these areas influence each other. In my studies, I plan to explore issues inside, outside, and especially on the borders of the United States. I feel extremely fortunate to be able to pursue this concentration, because I know it was not an option in years past.

This semester, you’re enrolled in Professor Peter Andreas’ Gateway Course, “Politics of the Illicit Global Economy.” Gateway courses are meant to focus on societal, global challenges. Why were you interested in the course, and what have you enjoyed about it so far?

In my sociology and economics classes, we study individuals, firms, and governments operating under the rule of law, which is one way to look at the world. However, that is not always how the world works. The Politics of the Illicit Global Economy class offers a unique perspective. I have come to realize that the illicit economy is a dark mirror reflecting modern society. It is easy to underestimate its importance since it occurs out of the public’s view, yet it has a tremendous impact on both domestic and international policy.

Last summer you worked at Precision Agriculture for Development in Bhubaneswar, India, and at the Edward M. Kennedy Institute for the United States Senate in Boston, MA. Could you describe those experiences?

In India there are several million small-holder farmers who cultivate their own plots. Often, they do not have the technical knowledge or resources to obtain the optimal yield from their land. Their productivity and incomes could be increased through technologically-driven “Precision Agriculture.” In India, Precision Agriculture for Development’s mission is to assist these farmers by providing a mobile technology platform to connect them with agronomic advisors. These experts provide guidance for managing fertilizers, pest control, soil conditions etc, so the farmers can increase their productivity sustainably.

I was really grateful to spend time in PAD’s Bhubaneswar office. My work involved field discussions with farmers to test a mobile application that would allow them to connect with agronomists in the city. It was fulfilling to be in the field talking to people. The experience taught me that in order to develop actionable solutions, one needs to get out there, meet, and understand people.

When I returned from India, I worked at the Edward M. Kennedy Institute for the United States Senate. The Institute’s mission is to educate visitors about the history and current role of the US Senate. The Institute promotes civic responsibility and education through interactive exhibits, simulations, and reenactments of historic Senate debates. During my time there, I helped run several of these programs. Because it is a non-partisan institute, the focus was not on current politics, but rather the importance of making one's voice heard in government — a message which isn’t just for Americans. I always thought if I could teach one person, one thing about democracy, it was a good day.