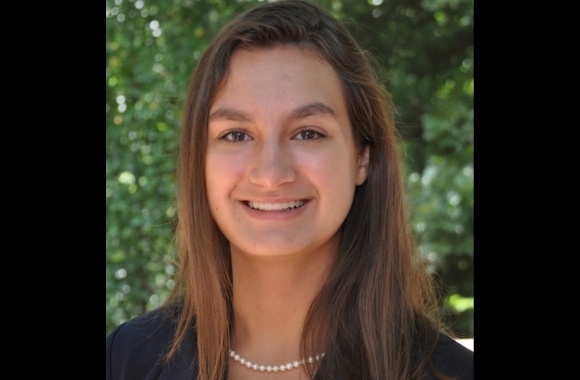 "I think these classes and my work over the summer have really opened my eyes to the complex world of coordination between civil and military actors in conflict zones, which has gotten me super interested in how coordination and communication is so important for future conflicts."

What did you do this summer, with your Watson SPRINT grant and Professor Dave Polatty?

When I saw the SPRINT applications come out last spring, I already had a mentorship relationship with Professor Polatty and communicated with him about pursuing a summer project. When I found out that his project had been approved for the SPRINT grant, I applied and was super happy to be accepted.

Throughout the summer, I met with Professor Polatty once a week to discuss the elements of the syllabus for the course “Humanitarian Response in Modern Conflict,” which was going to be offered this fall. We worked a lot on trying to adapt the various simulations and exercises that have always been a really big part of the course into the virtual format.

Can you describe some of the topic areas “Humanitarian Response in Modern Conflict” focuses on?

Much of the course has focused on deconfliction, and how humanitarians communicate with the military — whether it is working with the military, not working with them, or kind of coexisting in a location where there are military operations going on, and the advantages and dangers that poses. By considering specific historic and modern examples, the class focuses on the ethical questions that surround humanitarianism and conflict, and how those questions are going to continue to be amplified in future great power conflicts.

Can you describe one of the virtual simulations used in the course?

One simulation we adapted revolved around a fictional scenario, where there is an invasion in Syria and different roles are assigned to the students in the class. They have to act as those different actors, such as the Department of State, the Department of Treasury, and you have to coordinate a response. We also did a simulation where each student was assigned to be a different humanitarian actor and you have to know the role and stuff of your organization or respond and coordinate with other organizations in an active conflict zone.

Interactive activities like this just really help to reinforce the discussion and the readings and the topics that we talked about during class.

It was something I discovered when I got here, I originally came to Brown thinking I was going to study American Political Science. I'm an ROTC cadet, and I think doing ROTC and being exposed to the military world really got me interested in international affairs, because I felt like if I was going to work on the international stage, I should study it as well.

I took a couple of introductory courses, like Introduction to International Relations, and I just fell in love with it. I became interested in humanitarianism when I met Professor Polatty, as he and I met to talk about these issues — and it was a whole world that I had never really been exposed to before that I found incredibly interesting. I’ve really thrown myself into these topics and am now also interning with the U.S. Naval War College’s humanitarian response program.

I think these classes and my work over the summer have really opened my eyes to the complex world of coordination between civil and military actors in conflict zones, which has gotten me super interested in how coordination and communication is so important for future conflicts. As an ROTC cadet, I know that I’m going to go into the military, so it’s been interesting to have this experience now to be able to kind of prepare for a more operational role in the future.

Any advice for students looking for opportunities to work with professors, summer experiences?

I would definitely advise anybody interested in pursuing summer opportunities like the SPRINT grant to go for it. I think they are super valuable and I’ve found that being able to work one on one with a professor has gotten me so much more out of my education at Brown. I really recommend that people try to build those relationships — it's just one of the best experiences I've had at Brown.