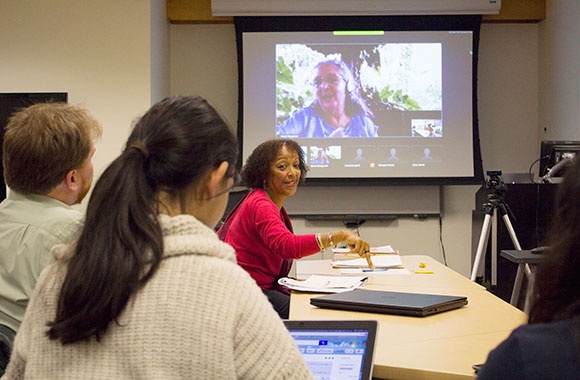 “It’s a way of getting the public policy closer to the forest people so that they can influence the decisions that are being made.”

Public policy students recently participated in a video conference with three socio-environmentalists working in the Brazilian Amazon. The theme was “Eco-Amazon: The View from Within, the View from Without.”  The November conference was part of Dr. Geri Augusto’s graduate seminar, Environmental Policy From the Ground Up, a course that focuses on how environmental policy problems are framed, interpreted and solved in the Global South and in marginalized communities in the USA. A number of students in the class had already become familiar with rainforest issues during a two-week summer immersion visit where they met with top policymakers in Brazil. The Brazilian participants in the conference included:

Here are highlights from a wide-ranging discussion about, among other topics, the difficulties of environmental policymaking around the Amazon in Brazil.

On the disconnect between urban-based policymakers and traditional communities

Vicente: “Public policy in Brazil must stop to consider the realities of the forest people and allow them to influence policymaking.” Vicente argued that instead of ignoring traditional peoples’ politics, the government must learn from them. “It’s a way of getting the public policy closer to the forest people so that they can influence the decisions that are being made.”

Saragoussi: “The Ministry of the Environment knew that there was a part of the Brazilian population that was left out of all the public policy. It was responding to the needs of urban populations.” Saragoussi explained that the connection between traditional peoples and the environment could be seen in traditional peoples’ economics and culture — and that environmental sustainability is inherent to their way of life.

However, representatives of traditional peoples often struggle to communicate policy back to the people they represent. “The population has few leaders that are able to understand how the government functions and the leaders are far from their communities most of the year.... There aren’t resources to share what’s going on. We need to translate the complex government language to simpler language that the people can understand.”

On the tensions within Brazilian government on environmental issues

Saragoussi: “ The [government] cares about cosmetic changes in urban areas. There is very little innovation. There was an innovative proposal for a bridge across the Amazon, which was literally abandoned. Policy about coffee and food production — a whole proposal about sustainable harvesting in the forest — was completely abandoned.”

Regi: “If we look at Brazilian emissions, a third comes from deforestations and changes in land use, a third comes from agriculture, and a third comes from energy production. The government is afraid to make commitments to curb this because it would hurt the selling of commodities, which are the strongest sources of GDP. The Brazilian government depends on the money from companies that build infrastructure projects, so they’re not [tackling] problems that could upset those groups. They don’t care about traditional interests because they’re not strong politically or economically.”

On how to foster cooperation between Amazon communities and environmental policymakers

Regia: “[A purely written text] approach doesn’t allow for the inclusion of the voices of the forest people. It’s important to use public radio stations and public channels that allow people to voice their concerns. Communities that are featured through these media channels feel valued. Their dignity grows.”

Vicente: “Cooperation is possible. The history of Amazonian environmentalism has expressed that. People from the darkest realities of slavery in the rubber extraction industry and people from Manaus [the capital of the Amazonas region in Brazil], and journalists, researchers that understand how to work together—I dare to say that the Amazonian movement wouldn’t be possible without all of them.”

Saragoussi ended the discussion with a question for the students: “Why are you interested in the Amazon? What can you do that is meaningful in your life that can help the Amazon and its people?”

Students paused to think, not ready to give Dr. Saragoussi an immediate response. Dr. Augusto assigned the question for homework.  Another answer, Augusto says, came in the ways in which students incorporated a more nuanced understanding of the views and experiences of the people of the forest and of the waters in their final products for the class. “I was amazed at the creativity, the policy imagination and the hard-nosed analysis that all the final papers and projects showed. And I really want to share with our Amazonian interlocutors the ones that hearkened back in some ways to the video conference discussion.  I think we’ll have to do a small video for that!”