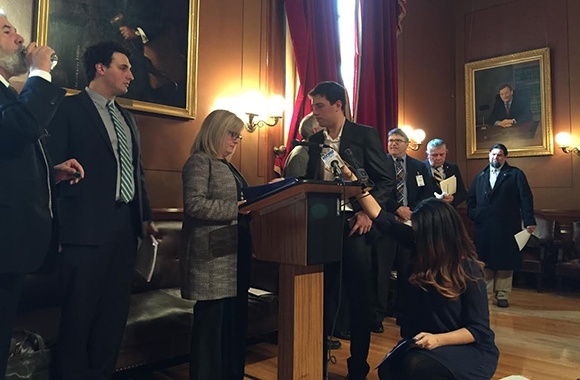 “Why is carbon pricing the way forward? You don’t have to choose between the environment and the economy … [carbon pricing] improves both of them.”

If you see a crowd dressed in blue clothes, flippers and goggles walking to the Statehouse on the afternoon of April 27, relax; you aren’t hallucinating! The Energize RI Coalition, which advocates enactment of carbon pricing legislation in Rhode Island, is organizing the “Rhode Island is underwater” themed rally. Founded last year by Solomon Goldstein-Rose ’16, the Coalition asserts that carbon pricing is an effective market-based approach to lower fossil fuel emissions and stimulate job creation.

“Sea levels are rising, storms are increasing; Providence won’t literally be underwater any time soon, [but] we want to use that visual imagery,” said Kai Salem ’18, a Coalition intern. Rally walkers will gather at 2:15 p.m. in Burnside Park and will set out by 2:45 p.m. for the Statehouse, where they will distribute Coalition materials to General Assembly members.

On Monday, April 25, from 7:30 p.m. until 9:30 p.m., the Coalition, the Watson Institute’s Taubman Center for American Politics and Policy, and the Rhode Island Student Climate Coalition will host a screening of the documentary, This Changes Everything, the premiere of the Coalition’s brief animated video, and comments from State Rep. Aaron Regunberg ’12 (D-Prov.), the bill’s lead sponsor in the House, in Room 106 of the Urban Environmental Lab, 135 Angell Street.

Climate change will be the defining issue of our generation, said Angell. “The Coalition’s carbon pricing bill is a solution… it’s necessary to get the ball rolling on measures that were needed yesterday, but are especially needed right now to start counteracting the effects [of fossil fuels].”

In 2015, the Office of President Christina Paxson allocated funding to the initiative; administered through the Taubman Center, the funds helped offset the costs of the Coalition’s consultant, research, and other expenses, said Goldstein-Rose. Immersed in managing his campaign for a state representative seat from his hometown of Amherst, Mass, Goldstein-Rose has stepped back from the Coalition’s work. The Coalition also received support from the John Merck Fund and the John Merck Family Fund.

The Coalition has grown to include several partners and supportive organizations, as well as more than 100 business endorsers, which Salem attributes to Brown students’ contributions. Now led by individuals unaffiliated with Brown, the Coalition may begin to reach out to university and college students in Rhode Island after these events and the upcoming introduction of the legislation in the State Senate.

Both Angell and Salem are pragmatic about the likelihood of enactment this year. Notwithstanding an outpouring of strong support for the bill at a House Environment and Natural Resources Committee several weeks ago, Salem, noting that change is evolutionary, said, “Even if the bill doesn’t pass this year, the Coalition will live on. Marriage equality in Rhode Island took almost 20 years to pass.”

“We’ve done a lot to bring together people from different communities across Rhode Island in favor of the bill… now that the general support has been generated … the Coalition … can leverage that to get the bill passed next year,” said Angell. The Coalition hopes that Rhode Island will serve as a leader, inspiring other states to enact carbon pricing legislation.

What have they learned from their Coalition engagement?

Although Angell has found that climate change conversations can be very cynical and depressing – notably on the national and international stages – her Coalition work has demonstrated that transforming one’s community is possible.

Involved with several environmental initiatives, Salem said, “This Coalition probably could not have happened in a bigger state, where … people [might be] less willing to drop everything and help their colleagues. I’ve been impressed by the power of connections and communication to [achieve] incredible things.”

“I see an opportunity for [these students] to learn how public policy is made by helping do research, draft legislation … and think about how to communicate that issue and work with the diversity of actors in the state to understand and help make it happen. It’s such a wonderful learning laboratory,” said Roberts.