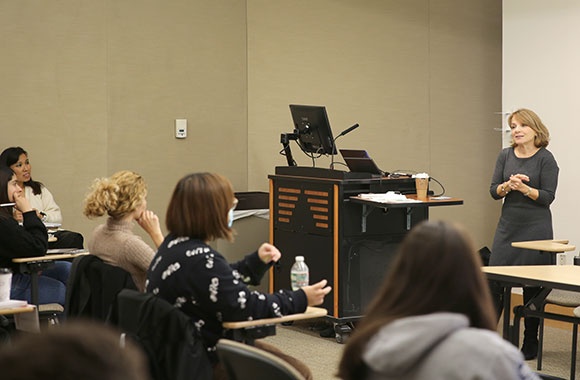 MPA students learn what affects policy making while also getting to know Watson.

A course in Watson’s MPA program aims to teach students how policy is shaped by various factors and how those factors differ—or not—in settings around the world. It also exposes them to the breadth of subject and regional expertise at the Institute by engaging Watson faculty as guest lecturers.

Team taught by Carrie Nordlund and Shankar Prasad, both of whom have served as associate director of the program at different times, The Politics of Policymaking in Comparative Perspective is designed to “get students to conceptualize their public policy-making process,” Nordlund says.

Whether the policy in question deals with climate, gender, or voting, Prasad says, these “future policy makers” are learning to ask themselves a set of questions about what will influence the policies they’ll work on: What is the history of a given place? What are the forces that shape policy there? Who are the stakeholders?

In each class, a Watson scholar lectures on a particular policy for an hour, followed by a second hour during which Nordlund and Prasad train students to look at the policy in its particular context.

They’re also exposed to a range of Watson faculty members, which can otherwise be challenging in the accelerated one-year program. “We want MPA students to have a sense of the place,” Nordlund says. Once students have been introduced to a faculty member in class, they can seek them out during office hours or engage with their center. “The course brings Watson to the students,” Prasad says.

When designing the course, Nordlund says, they were very intentional about diversity on many levels—geography, areas of focus, and the lecturers themselves. But they were also careful to draw on diverse readings, Prasad adds: “We were really focused on thinking about who the scholars who were writing these pieces were, as much as the content they were delivering.”

Both are delighted not only to be in the classroom again (Prasad is dean of the School for Professional Studies; Nordlund is assistant dean of winter and summer programs in the Division of Pre-College and Undergraduate Programs) but to be team teaching with each other. They’re also gratified to have MPA alumni as TAs—some of whom they knew as students and others whom they’re getting to know now.

Prasad points out that the students, who are “very international,” bring vital perspectives as well: “They're experts from the regions that they come from in the world, and so they're able to bring that expertise as well.”