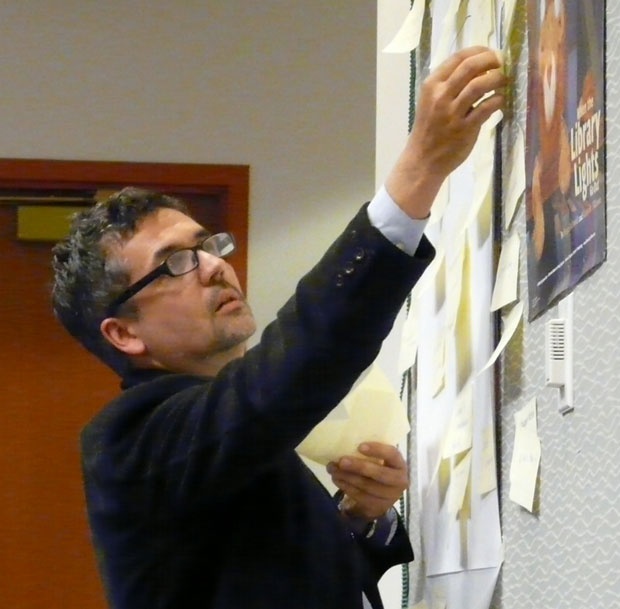 Citizens of Chicago’s 49th Ward this month selected 14 community improvement projects to receive $1.3 million in city funding as part of a year-long experiment in grassroots democracy.

Their participatory budgeting process, which Institute Associate Professor Gianpaolo Baiocchi helped design and facilitate, is now being considered elsewhere in Chicago and other US municipalities. The model is already in use in over 1,200 municipalities in other parts of the world – including one of the earliest examples, the Brazilian city analyzed in Baiocchi’s Militants and Citizens: The Politics of Participatory Democracy in Porto Alegre (Stanford University Press, 2005).

In the 49th Ward, Alderman Joe Moore paved the way for participatory budgeting. In the end, over 1,600 residents chose among 36 projects developed by community representatives, based on neighborhood assemblies and other input. The 14 they funded included such community improvements as bike lanes, murals, and street signs.

Baiocchi said he sees a strong sense of community identity embodied in the projects, which will begin in June.

Alderman Moore is expected to propose that Chicago’s City Council adopt participatory budgeting city-wide, and representatives of other Chicago wards were on hand to observe the proceedings, which were also widely reported in the local media. Civic leaders in other states have also shown interest in the model, said Baiocchi, who also co-directs the Participatory Budgeting Project as a nonprofit organization supporting its adoption.

As seen by Participatory Budgeting Project Co-Director Josh Lerner, of The New School for Social Research: “Chicago may seem an unlikely site for participatory democracy, given the city's famous patronage system and lack of transparency in public finances. … but frustration with backroom dealing is in part what makes Chicago and the United States ready for new ways of managing public money.”

Watch a Fox News report on the voting here.

Read a report on the Participatory Budgeting blog.