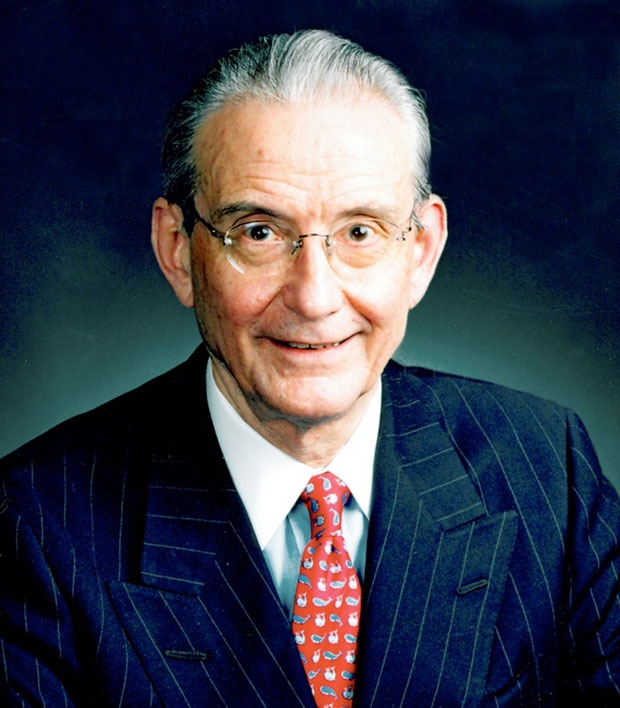 William R. Rhodes '57 LHD'05 (hon.), an international financial diplomat known for leading the resolution of economic crises in Asia and Latin America, has accepted a five-year appointment as a Brown professor at large based at the Watson Institute. Rhodes is the recently retired senior vice chairman at Citigroup Inc. and Citibank, and an emeritus member of the Institute's board of overseers.

“At a time when international economic turmoil dominates affairs among nations and commands the attention of scholars and financial executives, Bill Rhodes brings a wealth of experience and expertise to the understanding of these issues,” Brown President Ruth J. Simmons said upon his appointment. “His long career in international finance and his leadership role in the development of the Rhodes Center and the Watson Institute will make him an invaluable resource for undergraduates, graduate students, and faculty colleagues.”

Added Institute Director Michael Kennedy: “Bringing scholars and distinguished practitioners together in the address of pressing global issues is the Watson mission; to have Bill Rhodes working with our faculty and students in the address of the foundations of the financial crisis, and new modes of financial governance that ought to issue in its wake, moves Watson policy-significant scholarly work in critical, and vital, directions.”

Rhodes began his 53-year career at Citibank following his graduation from Brown in 1957. He spent two decades in a variety of senior positions in Latin America and the Caribbean before returning to New York in 1977 as head of corporate business in Latin America. During the 1980s, he chaired Citibank’s restructuring committee and headed the advisory committees of the international banks that negotiated debt-restructuring agreements for Argentina, Brazil, Mexico, Peru and Uruguay. In early 1998, when the Republic of Korea experienced liquidity problems, he chaired the international bank group that negotiated the extension of short-term debt of the Korean banking system. In early 1999, at the request of the government of Brazil, he acted as the worldwide coordinator to help implement the maintenance of trade and interbank lines by foreign commercial banks to Brazil. Rhodes retired as senior vice chairman of Citigroup and Citibank on April 30, 2010.

Rhodes is a longtime member of Watson's board of overseers and became a board member emeritus in July 2010. He is also a trustee emeritus of the University. Rhodes is the recipient of the New York Brown Club’s Independent Award and the Brown Alumni Association’s William Rogers Award. The University conferred an honorary Doctor of Humane Letters (L.H.D.) on Rhodes in 2005.

In recognition of his contributions to international banking and finance, Rhodes has received decorations and honors from governments in Poland, Korea, Brazil, Mexico, Argentina, Venezuela, Colombia, Panama, and Jamaica, and appointment as Chevalier and Officer of France’s Legion of Honor.

Brown University established the professor at large position to invite individuals of exceptional distinction to participate in the intellectual and academic life of the University. Other current or former professors at large include Romano Prodi, the former prime minister of Italy; Richard C. Holbrooke, US special envoy to Pakistan and Afghanistan; and Ricardo Lagos Escobar, former president of the Republic of Chile.