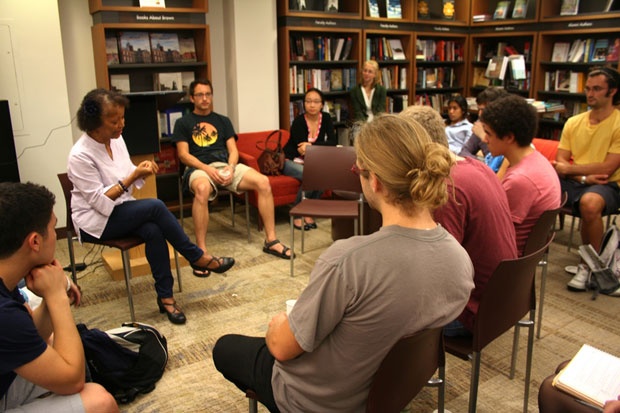 Geri Augusto and students at the Triple Helix event

Geri Augusto met with students from The Triple Helix, a student organization that explores the intersections of science, society, and law, as well as other science concentrators, last month at the Brown Bookstore. Augusto, a Watson Fellow and assistant professor of public policy, engaged the students about connections between sciences and the humanities, using images of art, science fiction, and myths regarding knowledge, humans, and “nature” drawn from Africa, Europe, and the Pacific. Her conversation was titled “Future Imaginaries – What if our Scientific Imaginaries Could Roam?”

Augusto’s presentation was one of The Triple Helix’s small, conversation-based events, called “Science Cafes,” featuring Brown University faculty and other invited experts. The hour-long discussions revolve around a topic chosen by the event’s keynote speaker,and are intended to be informal and thought-provoking, according to the society’s president, MariaLisa Itzoe ‘12.

“It was one of the liveliest and most interesting conversations I've had with students this year,” Augusto said of the event. “Talking about scientific imaginaries, nano/bio-ethics, and the conundrums of practicing science globally, especially in the Global South, was something many of them found provocative and useful.  And it is always fun to disturb the notion that space missions can only be named Apollo, or that it wasn’t until the advent of cyborgs that humans wrestled with the idea of transgenic beings.”

Augusto said discussions like The Triple Helix’s Science Cafes encourage students to “think about their studies and practice in a more global context.  After all, research is now more global than ever, and colleagues from the South can no longer be considered ‘junior partners,’ so the scientific imaginary might have to be much broader these days.”

Augusto is a member of Brown’s Science and Technology Studies (STS) program steering board; a co-convener for the Trilateral Reconnection Project for faculty and student mobility, which engenders joint research among Brown, the University of Cape Town, and the University of the West Indies (Mona) on Africana Studies; and co-convener for the past three summers of the Critical Global Humanities Institute of the Brown International Advanced Research Institutes (BIARI).