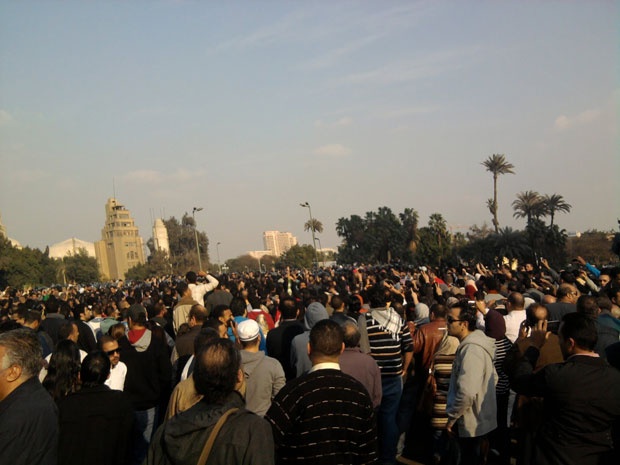 How is news being made today in the Middle East and North Africa – how is it being reported – how are the two acts really only one? Day-to-day, reading the Muftah Org conversation on the Global Conversation media portal at Brown provides one roadmap. Muftah Org co-founder Maryam Jamshidi '02 is just one of the Brown students and young alums charting the revolutions.

Muftah is an online foreign policy magazine featuring commentary and analysis on the Middle East and North Africa from rising scholars and experts on the region. Muftah provides “information and insight into the internal dynamics, indigenous concerns, and domestic influences that shape this often misunderstood part of the world.”
Muftah launched before the wave of change now sweeping through the region, with its Global Conversation cross-posts beginning in October. At the time, a typical report began: “On November 25, 2010, three days before the first round of parliamentary elections in Cairo, I was in one of the city’s most elite nightclubs. There, groups of 20- and 30-somethings drank imported liquor, danced, and behaved as if they hadn’t a care in the world.”
How quickly times have changed, and the urgency in Muftah's reporting is now more palpable as it moves across the region. Witness a post on January 20: “What follows is a retelling of events in Libya over the past 2 days as relayed to Muftah by courageous and committed individuals on the ground.”
News and analysis are coming from new and often very personal sources.
Al Jazeera's English-language website has received a massive influx of viewers from the United States, as Jeb Koogler ’11 has written in a Foreign Policy Watch.
Members of the Brown community are sharing sometimes startling perspectives, many amplified by the Global Conversation.

Amanda Labora ’12 was blogging before she was evacuated from Cairo, and a conversation she reports with a young Arabic professor tells a whole other side of the story. “I don’t know how I feel," he said. "I’ve lost everything. I’ve been having problems with my Dad and he kicked me out yesterday so I’ve lost my family. I’ve lost my friends. I’ve lost my job. My students are leaving, and who knows if the money in the bank is worth anything?” The group blog she was writing for, “Reports from Egyptians,” continues to post regularly.
Looking at another perspective, Claudia Norton '13 and Raillan Brooks '14 have created a Group Independent Study Project, according to the Brown Daily Herald, to examine social media and its impact on the recent Arab revolutions, building on their classwork in SOC 1871R: “Knowledge Networks and Global Transformation.”
Looking ahead, as Brown Middle East Studies Program Director Melani Cammett did recently in the “Just One Question” conversation, one sees high hurdles remaining if the goal is to effect true regime change out of the leadership changes so far.
How will this story be told? In Mariya Petkova ‘09’s most recent post from her “A Bulgarian in Egypt” blog, linked from the Global Conversation’s homepage, she reports that ”Yesterday a few floors above Tahrir Square I was sitting in a room with 20 young men and women who came up with the idea to start a newspaper dedicated to the protests and change in Egypt."