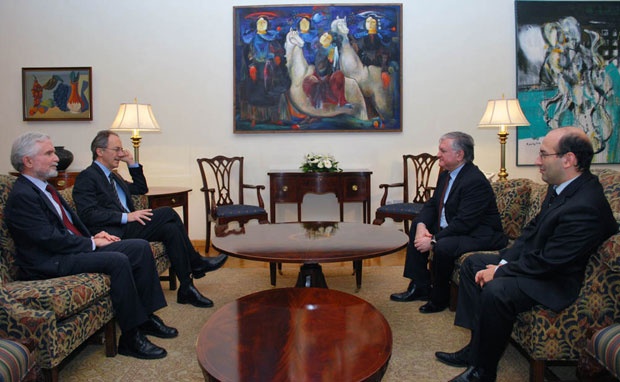 Institute Professor (Research) James Der Derian has been contributing his research on sustainable diplomacy, quantum diplomacy, and the media's influence on diplomacy to recent dialogues with policymakers and academics in European capitals. Meeting last month with Armenian Foreign Affairs Minister Edward Nalbandian in Yerevan, for instance, he emphasized the important balance between open borders and state sovereignty. Der Derian, co-editor of Sustainable Diplomacies: Studies in Diplomacy and International Relations (Palgrave MacMillan, 2010), met with the minister as part of a visit that included a lecture on “Diplomacy and Global Media” at the ministry’s school of diplomacy.

Diplomacy is also the subject of a talk Der Derian is giving this week at the Peace Research Institute Oslo (PRIO). His presentation on “Quantum Diplomacy” follows his public discussion of this kind of multifaceted, hard-to-pin-down diplomatic entanglement in Germany, as Bosch Public Policy Fellow at the American Academy in Berlin. In Norway, his multimedia presentation was inspired by a series of events that took place in February 2011 around the effort to negotiate a memorial in Berlin on the occasion of the 100th anniversary of the birth of US President Ronald Reagan. For the occasion, he has constructed a thought experiment with images to consider whether these events, produced by the ubiquity, interconnectivity, and reflexivity of global media, are symptomatic of a new quantum diplomacy.

Additionally, this month marks the publication of his article on "Quantum Diplomacy, German-US Relations and the Psychogeography of Berlin" in the Hague Journal of Diplomacy.

While in Europe, Der Derian has also addressed audiences and the media on the subject of security. He continues a series of screenings across Europe this week at PRIO of the documentary film Human Terrain, which was produced at the Watson Institute by Der Derian with filmmakers David Udris ‘90, and Michael Udris ’91. Human Terrain explores the controversy over a US military strategy to use "culturally aware" soldiers and embedded social scientists in Iraq and Afghanistan.

Last month, while in Yerevan, he also presented research on “Global Security in an Age of Heteropolarity: The Advantages and Vulnerabilities of Small States” at an international conference of participants from Germany, France, Belgium, Iran, Georgia, Romania, Israel, Russia, Canada, and the US on “Regional Security Dynamics in the Southern Caucasus.”

Read coverage of Der Derian's visit in the Armenian press.