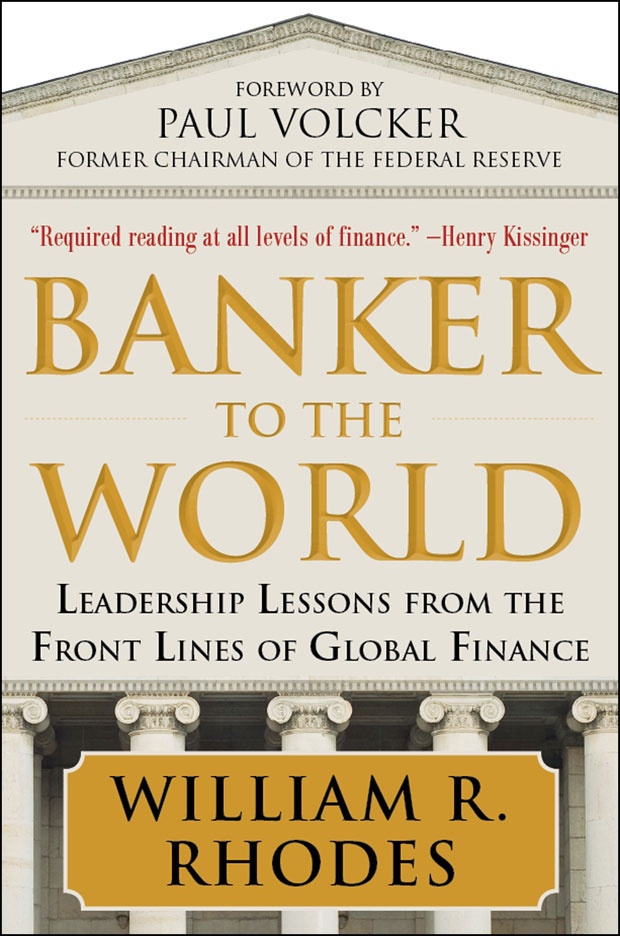 International banker William R. Rhodes '57 LHD'05 (hon.) lays out his principles for managing amid crises in a new book, Banker to the World: Leadership Lessons from the Front Lines of Global Finance (McGraw-Hill, 2011). Rhodes, a Brown professor at large based at the Institute, is widely recognized as an international financial diplomat who led the resolution of economic crises in Asia and Latin America as a top executive at Citicorp.

With his dramatic personal stories of financial negotiations at the highest levels – from Argentina to Zimbabwe – Rhodes provides lessons in risk management, crisis prevention, leadership, and more.

He concludes that: “The world will continue to undergo financial crises again and again, long after I no longer walk this earth. My recommendation is that we try to learn from these experiences and at the same time plan for success, because failure can pretty well take care of itself.”

Rhodes, who recently retired as senior vice chairman at Citigroup Inc. and Citibank, began his 53-year career at Citibank following his graduation from Brown in 1957. He spent two decades in a variety of senior positions in Latin America and the Caribbean before returning to New York in 1977 as head of corporate business in Latin America. During the 1980s, he chaired Citibank’s restructuring committee and headed the advisory committees of the international banks that negotiated debt-restructuring agreements for Argentina, Brazil, Mexico, Peru and Uruguay. In early 1998, when the Republic of Korea experienced liquidity problems, he chaired the international bank group that negotiated the extension of short-term debt of the Korean banking system. In early 1999, at the request of the government of Brazil, he acted as the worldwide coordinator to help implement the maintenance of trade and interbank lines by foreign commercial banks to Brazil. Rhodes retired as senior vice chairman of Citigroup and Citibank on April 30, 2010.

Rhodes is a longtime member of Watson's board of overseers and became a board member emeritus in July 2010. He is also a trustee emeritus of the University. Rhodes is the recipient of the New York Brown Club’s Independent Award and the Brown Alumni Association’s William Rogers Award. The University conferred an honorary Doctor of Humane Letters (LHD) on Rhodes in 2005.

In recognition of his contributions to international banking and finance, Rhodes has received decorations and honors from governments in Poland, Korea, Brazil, Mexico, Argentina, Venezuela, Colombia, Panama, and Jamaica, and appointment as Chevalier and Officer of France’s Legion of Honor.

Read excerpts of the book here.