On Monday and Tuesday, May 2-3, Development Studies Program seniors will make their theses presentations and on Wednesday, May 4, from 4-7pm, honors candidates in the International Relations Program will present their research findings. 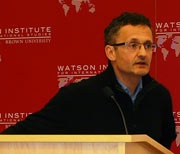 The preserved body of Soviet leader Vladimir Lenin embodies the doubling of Lenin’s figure: the banished Lenin and the canonized leader, according to Alexei Yurchak, associate professor of anthropology at the University of California in Berkeley. The body, which has attracted millions of viewers over the years, is on display in a large tomb located on the Red Square in Moscow. Recent debates on whether the body should be buried have given rise to discourse on the meaning of the body’s preservation. Indeed, in a recent talk at the Watson Institute, Yurchak argued that the public display of Lenin’s body serves much more than propaganda purposes.

Last month, students and faculty gathered at the Stephen Robert '62 Campus Center for a special screening of director Cathryn Collins's debut 2010 film, VLAST (POWER), a documentary on the arrest and trial of Mikhail Borisovich Khodorkovsky. The screening was followed by a panel discussion featuring director Cathryn Collins, Watson Institute Director Michael Kennedy, and Robert Legvold, political science professor emeritus at Columbia University and member of Watson's board of overseers.

In the first veterans' memoir that journalist Monica Haller helped create, there is a photograph of a dark figure walking across a bridge. The photographer, an American soldier named Jessie, explains in the caption that he had considered shooting that dark figure. Instead, he shot him with his camera. "Soldiers are the experts on their own experience," said Haller in a recent panel on 21st century war journalism. Haller and her two co-panelists, journalists Michael Otterman and Nick Turse, asserted the need to go beyond mainstream journalism's preoccupation with body counts and military strategy summaries. They stressed the extent to which mainstream media makes the personal experiences of soldiers and civilians invisible. 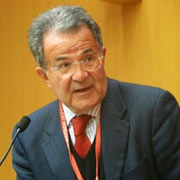 Three former leaders of Italy, Austria, and Chile, who have all led progressive parties and movements in their long public careers, discussed the future of the “Next Left” at the Watson Institute this week. Former Italian Prime Minister Romano Prodi was joined on Tuesday’s public panel by former president of Chile, Ricardo Lagos, and ex-chancellor of Austria, Alfred Gusenbauer. All three are currently visiting professors at Brown.

How does the political landscape shift when social welfare is provided by non-governmental groups – be they sectarian, charitable, local, international, or even families and friends? The recent issue of Studies in Comparative International Development (SCID) is devoted to exploring this question. Brown Associate Professor of Political Science Melani Cammett and Indiana University Assistant Political Science Professor Lauren MacLean acted as guest editors for the issue, titled “The Political Consequences of Non-state Social Welfare in the Global South.” Authors contributed research from China, Ghana, India, Lebanon, and elsewhere. 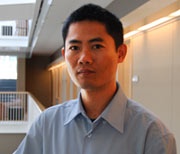 Voice of America this month hosted Tararith Kho, Brown’s International Writers Project Fellow for 2010-11, on a call-in show in the Khmer language. There, he described his poetry, short fiction, and activism on behalf of education and social and political reform in Cambodia. 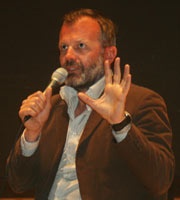 Babies is a documentary that aims to challenge paradigms and cultural stereotypes across the world, French filmmaker Thomas Balmès told an audience at Brown earlier this month. Known for using his lens to explore cultures over a 20-year career, Balmès was speaking after screening his film during a week-long visit on campus as the Lawton Wehle Fitt ’74 Artist-in-Residence.

On Thursday, April 12, Alderman Joe Moore from Chicago’s 49th Ward will speak at the Watson Institute about implementing a more democratic form of municipal budgeting in his community. 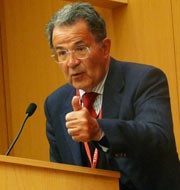 The President, a documentary airing for the first time this week, looks at the creation of a European president, featuring among its subjects Romano Prodi, the former Italian prime minister and European Commission president. Prodi is currently in residence at the Watson Institute as a Brown professor at large.

Watson Institute Senior Fellow Sergei Khrushchev has been reflecting on the moment when man first entered space, as the world commemorates the 50th anniversary of cosmonaut Yuri Gagarin’s 90-minute orbit around the Earth. It was a feat that had political as well as scientific implications, Khrushchev says, in recent interviews by the BBC, Providence Journal, and in the Russian media. He recalls a celebration in the streets of Moscow that rivaled Victory Day at the end of World War II, as the world looked on and America suffered another loss in its space race with the Soviet Union. On Thursday at 4pm, Khrushchev is also participating in a forum on campus titled “Commemorating the 50th Anniversary of the First Human in Space: The Flight of Yuri Gagarin.” 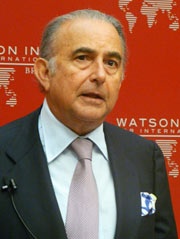 The internet was abuzz with tweets announcing that the 33 trapped Chilean miners were safe hours before the country’s president Sebastián Piñera officially confirmed it. Twitter and its cyber sidekicks have ushered in a new age, according to Juan Luis Cebrián, chief executive of the Grupo PRISA Spanish media conglomerate and former editor of El País. Technology has snatched control from the establishment to empower citizens instead, he said during a recent panel on "The Public Sphere: Media, Education, and Civic Culture in Iberoamerica." Ricardo Lagos, former Chilean president and Brown professor-at-large, also spoke on the panel, which was moderated by Gustavo Cisneros, president of Grupo Cisneros.

Kosova and Libya are juxtaposed nowadays in suggesting what humanitarian intervention can do, Institute Director Michael Kennedy noted in a recent essay on jadaliyya.com. And in that context, “it’s not just a question of the strike, it’s the follow through that should be of concern as well,” he said, pointing out that Kosova remains under the jurisdiction of international agencies more than 10  years after NATO bombed Serbia and its forces to defend Kosovars from genocide. And still Kosova’s democracy suffers, he noted.

As China and its neighbors continue territorial wrangling in the South China Sea, Institute Visiting Associate Professor Lyle Goldstein tells the New York Times of a “dangerous escalation of tensions” since last summer.

Three former national leaders will be in residence together at the Institute in early April, as part of Watson's agenda for bringing leading policymakers and academics into collaboration to shape alternative futures for a better world. Emblematic of this approach is a public panel on Tuesday, April 12, at 5pm on “The Next Left in the Current Global Crisis,” featuring all three leaders: former Italian Prime Minister Romano Prodi, Chile's past President Ricardo Lagos, and former Austrian Chancellor Alfred Gusenbauer. The event is part of an ongoing Next Left series on the future of progressive policy. Other lectures on subjects including climate change, immigration, and the revolutions in North Africa are scheduled from April 5 - 16.

Rhode Island high school students will discuss global issues with US Sens. Jack Reed and Sheldon Whitehouse, Rhode Island Governor Lincoln Chafee, US Rep. David Cicilline, Secretary of State A. Ralph Mollis, and other elected officials and civic leaders at the Rhode Island State House on Monday, March 28. The Rhode Island event is part of the 13th annual Capitol Forum on America’s Future taking place in several states nationwide. The program was conceived by Brown University’s Choices for the 21st Century Education Program, an affiliate of the Watson Institute for International Studies based in the University’s Office of Continuing Studies. 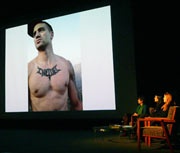 In one photograph, a former Israeli soldier swims in a pool, the stumps of his amputated legs prominently floating in the foreground. In the next, a wrinkled Vietnam War veteran, protectively draped in a blanket, mournfully stares at the camera. A tattooed soldier is snapped in deep sleep, curled up on an army cot. In a vivid color shot, a uniformed veteran crouches on a Brooklyn sidewalk as a garbage truck lurches behind him – the sound of which triggers trauma from an attack he experienced in Iraq. “Soldiers are not just robots, not just heroes,” said Suzanne Opton, a photographer whose work focuses on American soldiers, during a recent panel about photographing soldiers. “We should know them as human beings.“

“I see something which is superficially appealing, individually rational perhaps, and ultimately collectively disastrous.” This is how Watson Institute Faculty Fellow Mark Blyth describes austerity policy, a debt-reduction approach gaining ground internationally, nationally, and in American states like Wisconsin, where protests against such policies have been particularly strong. His remarks were broadcast on Wisconsin Public Radio and around the country, on the public radio program, To the Best of Our Knowledge. Blyth is author of a book called Austerity: The History of a Dangerous Idea (forthcoming, Oxford University Press).

French documentary filmmaker Thomas Balmès will be the Lawton Wehle Fitt ’74 Artist-in-Residence at Brown April 4-10. The director of several documentaries – including most recently Babies (2010) – Balmès is an advocate of direct cinema and an acute commentator on globalization. With support from the Creative Arts Council, Global Conversation, Global Media Project, and Watson Institute, he will be participating in screenings and discussions, as well as meeting with students and faculty interested in documentary work.