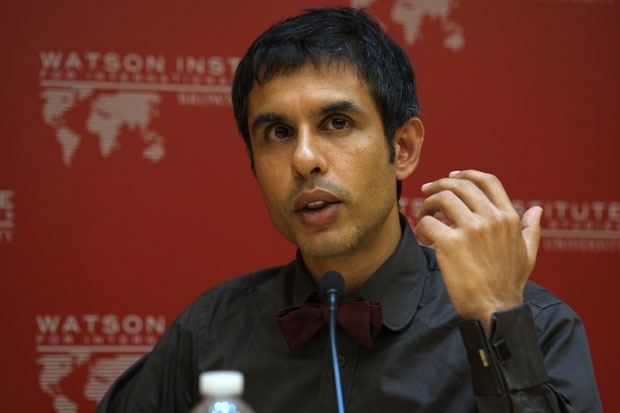 Writer Rana Dasgupta led the fourth meeting of the Brown-India Seminar, giving a talk drawn from research for his forthcoming book on Delhi. The lecture, titled "Intimations of Futurity: Delhi, New Elites and the World," sketched the psychological and social effects wrought by the massive influx of wealth India's capital has seen over the past two decades. Video from the seminar is available here.

Claire Luchette '13 spoke with Dasgupta during his visit to the Institute:

For British novelist Rana Dasgupta, the best stories come from the most melancholy places.

Dasgupta's 2009 novel Solo narrates a century of European history through the life and daydreams of Ulrich, a hundred-year-old blind Bulgarian man. Using Ulrich's experiences as a lens, Solo scopes the history of Bulgaria through the early 20th century and into the communist regime.

His research for the book consisted mostly of conversing with Bulgarians and hearing their stories. "There is not a very significant amount written in English about Bulgaria," he says. "There are very few books that give a history of Bulgaria. In a way, that's ... really good because it throws you necessarily into individuals' stories, which are much more useful to novels."

In his conversations with Bulgarians, Dasgupta says it became very clear that a tone of despondency pervades the country in the post-communist era. "There's a sort of melancholy to that place which I found extremely fertile as a mood for the various things I wanted to say in this novel: the melancholy of lost histories and lost experiences."

It's these lost stories that drew Dasgupta to the country initially. In Britian, he says, "there is an idea that Bulgaria is the least interesting place on the planet, and that's why I had the desire to go. When something is so universally written off, it must be something interesting."

Acting on this instinct, Dasgupta first traveled to Bulgaria while he was researching a section of his first novel, Tokyo Cancelled, in Istanbul. "Sofia [the capital of Bulgaria] is a three hour bus ride from Istanbul." The bus ride provided an introduction to the economic conditions of Bulgaria: "You go from Asia to Europe, from a highly developed country to a totally decrepit country."

After the fall of the Soviet Union in 1989, Bulgaria experienced "crazy, crazy economic collapse in the 90s" and has since struggled to recover. For Dasgupta, Bulgarians' economic difficulties represented a larger international issue that he hoped to explore in his novel: "the regression of societies."

Dasgupta sees Bulgaria as an exception to the "popular Western notion that everything will get better. ... For a while, you thought your kids would have better lives than you did: they would be more exposed to the world, would be better educated, would be healthier and wealthier. And I was interested in seeing a very dramatic inversion of this idea."

In Bulgaria, he says, people talk about their lives in the years before and after the Communist regime poignantly, and these powerful histories informed Ulrich's story in Solo. Details about the setting of Ulrich's childhood home, for example, came directly from conversations with a professor of history whom the writer got to know in Sofia. "He used to meet me at 9:00 every morning and walk me around the city and tell me stories about his parts of the city and his memories of those parts of the city. Ulrich's childhood house that he moves into after losing his first house is very much a scene described to me by the professor about when he was a kid."

These descriptions provided the inspiration for the "imposing house" designed in "the Viennese style" that Ulrich's father preferred. When his childhood home is destroyed early in the book, Ulrich

...watched the cranes demolish the house he had lived in ... his father's Viennese fantasy had been blown open. The flues connecting the fireplaces to the chimney were now a gaping lattice on the outside of the building, and a wooden door open to the void. ... As they pummeled the stone, it was like a series of concussions, and the final dusty surrender came as a relief.

The Novel as Community Project

Dasgupta credits the details of this and other scenes in the book to the stories and advice of the Bulgarians with whom he developed friendships. Only in these conversations, he says, could his novel take shape. "Something you miss out on with official histories are those details: how does a kid hang out?"

His Bulgarian friends also helped Dasgupta during the editorial process, providing an "insider's" perspective of the reality of the influence of the communist regime. In one scene in the book, Ulrich is asked to inform on his boss. "When I first wrote the scene, the boss did indeed go to prison, because I had the kind of facile outsider's idea of the system: if you break the rules of the system, the system will punish you. But I had a Bulgarian friend who read the scene, and she said, 'You don't understand the system, ... [it']s much more paradoxical and ironic than you think it is.'

"That's how you benefit from making your book a community project. Other people know so much better than you do. Talking to people provided me with inside looks at the day-to-day evidence of the farcical communist regime. The system was brutal and violent to offenders, but at the same time is breaking all its own rules, and there is kind of a vertigo in which you don't know where the ground is."

This note of rootlessness permeates Solo. It could also, at first glance, apply to much of Dasgupta's own experience. The writer grew up in Cambridge, went on to study in Oxford, France, and Wisconsin, and for the past 12 years has lived in New Delhi. But, although he is a man of multiple nations and a novelist of magical remove, Dasgupta has made it a priority to understand fully the many cities he calls home.

Dasgupta is nearly finished with his next project, a nonfiction book about Delhi. "Again," he explains, "the book derives from conversations and basic interviews. The core group [I have interviewed] is the upper middle classes. It's a book about the elites and what kind of world they want to live in and who they are. It's about the great changes that have happened in the lives of those people in the past 20 years."

As an outsider, Dasgupta values the "raw energy" of Delhi as an emerging global capital. "When I moved to Delhi, I happened upon an amazing moment in the world. It is an amazing place for a writer to be. The city throws up a lot of different questions, themes, and narratives all at once."

Delhi became his artistic muse and source of inspiration. "It's a classic writer situation. American writers wrote from Paris, so many French writers wrote from New York, James Joyce wrote from Italy, Conrad wrote from all over. [Relocation] is a situation that has provoked literary thought. You perform an archaeology of yourself and realize that you are very artificially constructed. You have been made in one place that has taught you to do things and see things like this, and there's really no reason that you see things like that. Moving to another place puts you through this process where you must decide what it is about yourself that you'd like to retain, and what about it ... prevents you from inhabiting the world in a larger way. I think it's a very empowering process because it makes you more observant of your own behavior and other people's."

As in Bulgaria, Dasgupta cherishes the opportunity to get to know natives. In Delhi, he says, "People are very bright. There is something about the struggle for independence that produced a contrary kind of intelligence: an intelligence that is critical of power and empire. People in Delhi are quite good readers of how the world is structured."

Dasgupta is among them. This perceptiveness is an ideal that he depicts in Ulrich's character, too. As a man growing up in 20th century Bulgaria, Ulrich experiences the failures and paradoxes of a society in radical transition. But this experience very much applies to the bulk of what Dasgupta focuses on: economic change and cultural identity, individual stories of national ordeals. In both his fiction and his nonfiction, Dasgupta reveals how, as he observes through Ulrich, "the world itself has become nonsense," and seeks to search the floor of the "great black ocean of forgotten things."