Former Colombian President Reflects on Past and Future of Drug Wars 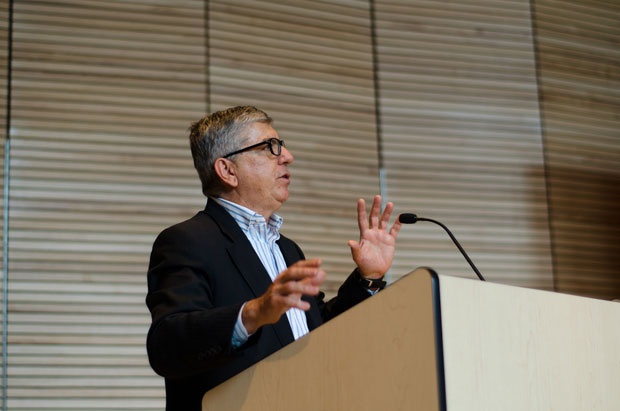 Cesar Gaviria Trujillo, former President of Colombia offered his insights on the continuing war on drugs in the US and Latin America. In his term as President from 1990 to 1994, Gaviria made significant progress cracking down on drug trafficking in Colombia, and was credited for improving the safety and security of his country. After leaving the presidency, Gaviria served as the Secretary General of the Organization of American States from 1994 to 2004. Gaviria spoke on April 12, delivering the keynote address for "Drug Wars in the Americas: Looking Back and Thinking Ahead", a two-day event organized by the Center for Latin American and Caribbean Studies at Brown.

Reflecting on his experiences, Gaviria noted the unique circumstances under which he took office in 1990, calling that year's electoral campaign "possibly the worst campaign in the history of any country." The 1990 election in Colombia was characterized by an unprecedented level of violence as the drug mafia flexed its muscle and sought to exert influence over the country's political process. In the run-up to the vote, four presidential candidates were killed, including the leading candidate, Luis Carlos Galan. As a result, Gaviria, who was Galan's debate chief, ended up running for President.

Gaviria said that a strengthened judicial system was critical to the progress his administration made in the war on drugs. He explained that before his administration's reforms, the government would arrest drug lords but later be forced to set them free when the mafia threatened witnesses who came forward with incriminating evidence. In response, Gaviria's administration instituted a system to ensure the secrecy of the identities of both judges and witnesses in cases against drug traffickers. Gaviria said that as a result of this measure, his government began to get the decisions it needed against the drug lords.

With regard to Mexico's progress in the war on drugs, Gaviria minced no words. "I think that country needs to improve significantly in justice and operations," he commented. Gaviria said that unlike the steps his administration took in Colombia, the Mexican government "hasn't given enough tools to [the] judiciary" and lacks the power to crack down on the drug lords. For example, witnesses in Mexico with critical information are afraid to speak up because they fear repercussions. Gaviria suggested that Mexico should also commit to protecting witnesses and keeping their identities secret, as his administration did. He added that more emphasis has to be placed on training the country's security forces to deal with well-armed drug lords, kidnappers and terrorists.

In the second half of his talk, Gaviria focused on the consumption of drugs in the US. He said the US has to shoulder some responsibility for the drug-related violence that continues to grip many Latin American countries. "The US cannot be indifferent. ... Americans have to wake up" and see how much damage they are causing Central America because of their failure to solve their own problem of drug consumption at home, he said.

Gaviria said it was clear that previous US efforts to reduce drug consumption by strengthening law enforcement have not been successful. He reminded the audience that even though policymakers and politicians point to positive law enforcement figures to highlight the progress they have made in the war on drugs, the rate of drug consumption remains higher in the US than in Europe. Gaviria said that the European approach has merit, and the US could consider adopting some of the strategies used by Europe to reduce drug consumption.

"A world without drugs is a utopia, and all utopias fall. ... That is stupid, it will never happen. Everyone knows it's not true," he said, making the case for drug regulation instead of an outright ban.

Gaviria claimed that the US is currently more focused on imprisoning drug addicts than helping them. He pointed the alternative approach taken by Portugal, where one can go to any doctor and get help for addiction to cocaine, heroin and other drugs without fear of legal consequence. In contrast, Gaviria said, drug addicts in the US get little help and are sent to prison, causing a strain on prison capacity and government budgets. He said it has been estimated that California spends $15,000 annually per inmate, and pointed out the money could be better used to rehabilitate drug addicts.

Gaviria concluded by underlining the importance of both taking a tough stance against drug traffickers and developing a more flexible policy to reduce drug use among consumers. He said while Latin American governments should continue drawing a hard line against the drug mafia, the American public needs to have a discussion on whether regulation might be a better alternative to current policies on consumption in the US. Regulation is "not weakening the law enforcement effort, but instead reinforcing it," he emphasized.