Former PM Prodi Speaks on China, Europe and the World 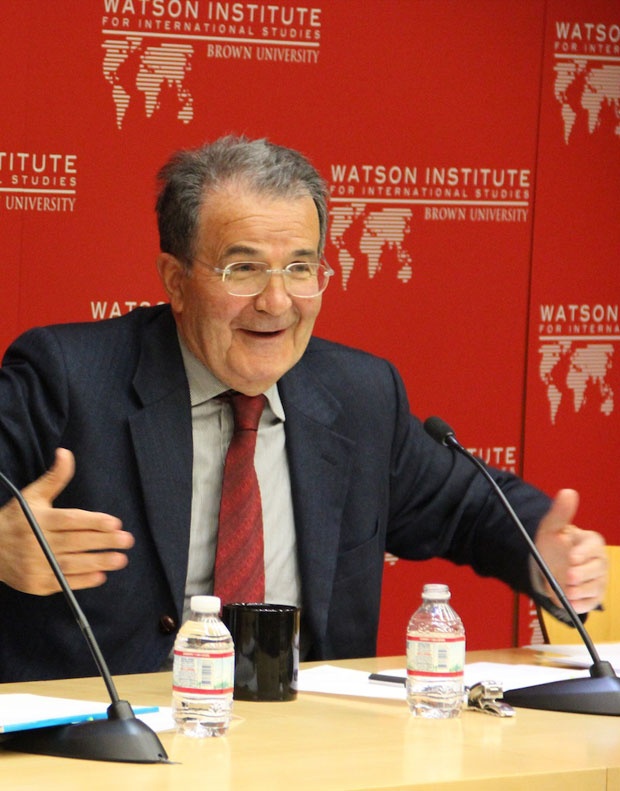 Very few people were able to predict that China would grow so quickly when it first opened its doors in 1979 – not even Romano Prodi, former Prime Minister of Italy and former President of the European Commission. Prodi, who is Professsor-at-Large at Brown, spoke about China's rise and EU-China relations in a talk at the Joukowsky Forum on Monday. Prodi said that when he first became involved in China in 1984, he did not think that its rise would be so rapid. "I underestimated the possibility of such a continuous growth for such a long time," he said.

Prodi explained that China's quick growth is possible because of its strong central government. He said that the lack of a democratic political system allows Chinese leaders to make critical decisions and take a long-term perspective on issues without giving too much thought to popular opinion.

Prodi drew a contrast to the system of government in the US and Europe, saying that even local elections in the West have national impact. He highlighted how the capture of the late Massachusetts Senator Ted Kennedy's seat by Republican Scott Brown catalyzed a shift in US public opinion one year into President Obama's term. Similarly, the EU is continually divided over how to move forward on short-term issues because of political pressure from constituents, leaving politicians with little energy to think about long-term strategy, said Prodi.

According to Prodi, the fact that voters are shortsighted and fail to consider the country's long-term interests is the single greatest problem the West faces today. "Reconciling democracy with long-run goals is the only thing that will save Western civilization," he said.

Prodi said that there are several bilateral issues that stand in the way of closer ties between the EU and China. He recalled that during his term as President of the European Commission, two main obstacles divided Europe and China: recognition of China's market economy status, and the ongoing embargo on the sale of European arms to China. Prodi added that because of disagreements among European countries, both issues still remain unresolved eight years after he left the position.

Another issue that has flared up recently is Europe's trade balance with China. Prodi pointed out that the entirety of the European trade deficit is with China, and if one were to ignore China's trade with Europe, Europe's trade would appear balanced. However, if one were to look at Germany's figures alone, one would realize that Germany actually runs a trade surplus with China. Citing this as an example, Prodi said that the differences between the component states of the EU make it difficult for leaders to take a united approach to solving problems.

He revealed that this was also a reason why the Chinese have deliberated for so long on the issue of whether or not to buy European bonds. If the member states of the EU can unite around a long-term strategy against the debt crisis, the Chinese would have no problems with the bond purchase, said Prodi.

Prodi acknowledged that China-bashing is very popular among some European politicians, but was confident that the European public's perception of China would improve as the Chinese continue to invest and create jobs in Europe.

When asked about the importance of human rights issues on the EU-China bilateral agenda, Prodi emphasized that it is a "very, very important" concern for the EU. He added, however, that he does not think that "putting this issue as a contending issue will help human rights in China."

On the question of whether China's rise will be peaceful, Prodi said that the Chinese have so far successfully avoided being drawn into conflicts like the wars in Afghanistan and Iraq. As China's global footprint increases, however, it will be hard for the country to avoid being engaged directly into conflicts. "China will certainly be one of the big protagonists of the world," he asserted.

In response to an audience question about whether China can innovate its way out of the middle-income trap that many developing countries face, Prodi expressed optimism. He cautioned against dismissing China's ability to innovate, saying that nobody could have imagined that South Korea, a country of only 40 million people, would be able to make so much progress. In just two decades, South Korea has transformed into a leader in six global sectors, and is known worldwide for translating ideas into novel products. Based on the record of South Korea, it would be foolish to dismiss China as a country that cannot innovate, said Prodi.

The talk was co-sponsored by the Year of China and the Watson Institute.