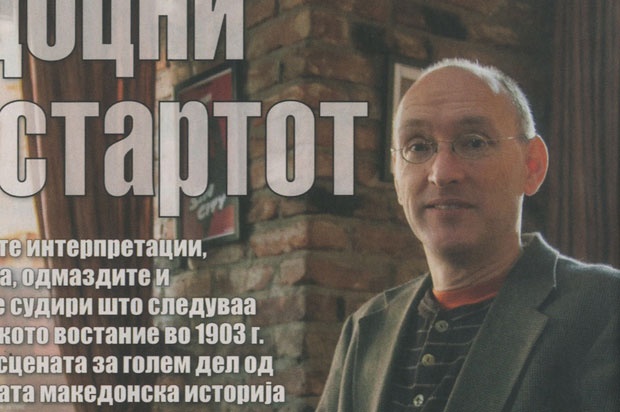 Keith Brown, who is currently a Fulbright Scholar in Skopje, capital city of the Republic of Macedonia, was recently interviewed in one of the country's leading weekly news magazines. He answered questions about his long-time interest in Macedonian history, his current research into Macedonia's democratic transition, and his impressions of the current phenomenon of "antiquization," which is reshaping Skopje's urban and political landscape.

Professor Brown's previous two monographs on different aspects of the politics of history, based on archival and ethnographic research in Greece and the Republic of Macedonia, have both been translated under the auspices of the Foundation for Open Society in Macedonia (FOOM). He also spoke and answered questions from the floor at a well-attended promotion of the Macedonian version of Macedonia's Child-Grandfathers: The Transnational Politcs of Memory, Exile and Return, 1948-1998, on November 28.

Download a full-length PDF of the article in Macedonian.