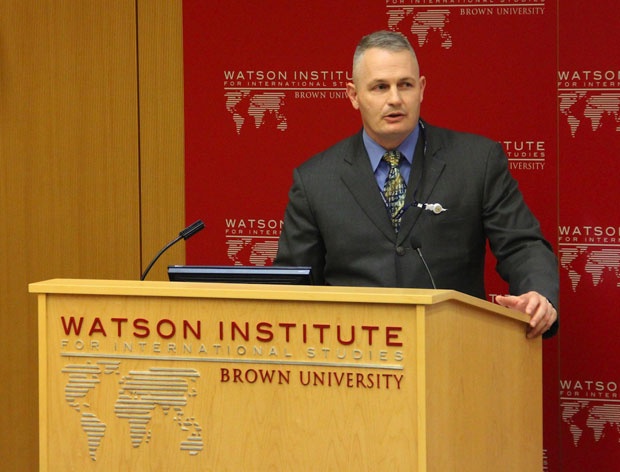 Succession of power in North Korea captured the world's attention recently, with some speculating that there would be a violent power struggle and the late President Kim Jong-Il's appointed successor, his son Kim Jong-Un, could have difficulty consolidating his rule.

US Marine Corps Lieutenant Colonel Dee Rosser spoke this month on the North Korean leadership transition as part of the "Future of East Asian Security" lecture series. Dee is a Marine infantry officer and an East Asia Foreign Area Officer. He is fluent in Korean and served at the US Embassy in Seoul from 2004-2005. Dee was also the Operations Officer for the United Nations Command Military Armistice Commission from 2005-2007.

In approaching the North Korean leadership transition, Dee cautioned against "trying to take a very complex problem, and trying to put it in a simple model."

He disagreed with the view that Kim Jong-Un's position would be threatened by a power struggle with other North Korean leaders, most notably his uncle, Jang Song Thaek, who holds several key positions in the country's military. He said that when it comes to leadership transition, "the DPRK knows no other way". The first President of the Democratic People's Republic of Korea (DPRK) was Kim Il-Sung, who then anointed his son, the late Kim Jong-Il as his successor.

According to Dee, "Korea out-confucianized the Chinese in terms of adherence to Confucianism." He explained that there is a clear hierarchy in every social structure in North Korea topped by the most senior father figure; the Kim family occupies this role in the DPRK. This special status explains why Kim Jong-Un is unlikely to lose control, he said.

Currently 28 years old, Kim Jong-Un is said to be the world's youngest head of state. While his father was groomed by his grandfather for more than 21 years to take over the reins of leadership, Kim Jong-Un did not have many opportunities to take up important responsibilities in the government and military because of his young age. Traditional Confucian societies emphasize respect for elders, and his lack of experience might appear to undermine Kim Jong-Un's rule. Dee said, however, that North Koreans consider the Kim family divine, and would not see Kim Jong-Un's rule as less legitimate simply because of his youth.

Dee also shared his thoughts on negotiations with the North Koreans. He expressed frustration at the difficulty of negotiating with the DPRK, and outlined what he believes is the strategy that North Korean negotiators regularly use to achieve their aims without giving up too much ground:

The talk was sponsored by the Department of East Asian Studies and the Asia-Pacific Studies Group at the Naval War College.