A Tug of War between National Security and Civil Liberties 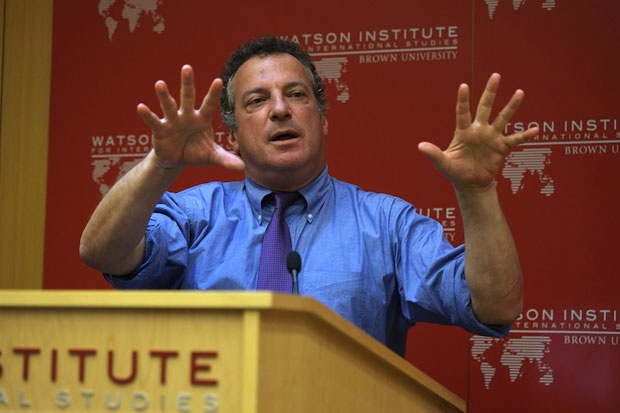 In his new book, Enemies: A History of the FBI, Pulitzer Prize-winning writer Tim Weiner narrates the history of one of America's most secretive intelligence agencies, including the major players and events that formed their tactics and ethics. Weiner spoke about Enemies at the Watson Institute on October 16 as part of the Institute's Global Security Seminar Series.

Weiner recounts the history of the FBI around what he calls a "state of continual struggle" and "a tug of war between national security and civil liberties." Weiner's framing naturally raises questions. Which wins: civil liberties or national security? Can there ever be a perfect balance between the two? Have there been times when one has been more important than the other?

Task: intelligence by whatever means necessary

Early on, security trumped all. In 1908, in the wake of President McKinley's assassination by an anarchist, President Theodore Roosevelt and Attorney General Charles Bonaparte secretly created the FBI. The men hoped it would control great malefactors of wealth and corruption in Congress, while also crushing anarchy. In their founding vision, the means through which the FBI could reach these ends were without limits.

"Teddy was willing to kick the Constitution in the gutter," says Weiner. The historical moment explains why Roosevelt encouraged such broad power for the FBI: a president had been assassinated, and, after the Spanish-American War of 1898, the United States had become an imperial power, gaining control of Cuba and seizing Puerto Rico, the Philippines, and Guam as colonies. The internal and external context at the turn of the century made intelligence seem an essential commodity to be obtained by whatever means necessary. As Weiner puts it, these early players did not realize that "When you push power beyond your borders, people push back."

While the FBI was not founded until 1908, Weiner is clear that the debate over intelligence gathering reaches back to the founding fathers. The epigraph of Enemies is a passage written by Alexander Hamilton in 1787, positing the "fundamental struggle between security and liberty." The passage warns that "To be more safe, [nations] at length become willing to run the risk of being less free."

During and after World War I, the FBI continued its formation as a national security force. The perceived necessity of the FBI grew alongside the rise of the Soviet Union and the increasing sense that, in President Woodrow Wilson's words, "We have to crush anarchy."

Quoting FDR's Attorney General, Weiner notes, "'A president at war is no great respecter of the constitution.'" Leaders of the wartime government "were willing to use the FBI as a weapon - not simply a shield - but as a sword, and fortuitously for them there was a rosy young man at the Department of Justice named J. Edgar Hoover."

J. Edgar Hoover "was the law."

The FBI in the 1920s was a "sewer of corruption," says Weiner. After it was largely gutted of its leadership in an effort to curtail such corruption, Attorney General Charles Hughes appointed J. Edgar Hoover as director. Hoover would hold that post for "48 uninterrupted years. No one has ever held that much power for that long in the history of the United States," Weiner said. "He aggregated more power for himself ... than any unelected official ever in the United States."

"Hoover is like a statue that stands in the middle of the American Century encrusted with grime," Weiner said. He was "not a tyrant in a tutu" as some have charged, referring to what Weiner says is too large a focus on Hoover's possible homosexuality, but he was "an American Machiavelli" and "the most brilliant bureaucrat of the 20th century." Hoover's relationships with the many presidents during his tenure ranged from close to tense: he was friendly with Roosevelt, Eisenhower and Johnson, and didn't get along with Truman or Kennedy. But his immense power was understood by all.

Weiner reveals the rampant abuses of civil liberties — like wire-tapping and seizure of persons and property without warrant — that were common and accepted during Hoover's tenure. "[Roosevelt] once said publicly after World War I, if the American people knew what we had been up to during the war we would all be in prison for 999 years, and then he laughed." With Roosevelt's approval, Hoover "went to work bugging, spying, infiltrating. He was pretty good at this, and he was good at it from the start."

In the fall of 1939, the Supreme Court unanimously ruled wire-tapping and bugging unconstitutional, making one of the FBI's most common tactics illegal in favor of protecting civil liberties. But pressure from the Supreme Court didn't stop Hoover. Rather than challenging the decision in the courts, Hoover took an FBI case showing a serious threat of Nazi espionage to Secretary of Treasury Morgenthau and asked the President to give written permission – Weiner stresses this point — for Hoover to ignore the Supreme Court. "That piece of paper gave him the authority to do whatever he wanted against the enemies of the United States," says Weiner.

The mountain of civil liberties abuses that Weiner cites makes clear that security won in its struggle with civil rights for most of the 20th Century. Hoover's tenure demonstrates the unprecedented power the Director of the FBI has in dictating the tactics and ethics of the organization. Weiner said that these "opposing forces" of security and liberty "have been thrust upon the FBI," and that the institution has been ill-equipped to find a balance between them. Nonetheless, he added, the FBI's current director, Robert Mueller, has shown a capacity to balance security and civil liberties.

The attacks on September 11 could easily have led to increased violation of civil liberties, but recently released documents show that Mueller met with President George W. Bush in March 2004 and promised to resign if the monitoring of emails and phone calls wasn't cut back. "Bush backed down," Weiner said. "That is power. ... Mueller said no in service of the constitution."

Weiner's optimism for the future of the FBI seems to rest on Robert Mueller and the restraint he has shown, as well as on some positive changes in the culture of the FBI. "They can do anything they want and they don't have to tell you, [but now] when the FBI gets caught, they confess error. And that's new."

Weiner finished his talk at the Watson Institute with questions from the audience. One member of the audience asked, in thinking about Hoover, "Is there anywhere that we can 'give the devil his due?'" What did Hoover accomplish in fortifying our national security?

"I give the devil his due: you have to have counter-intelligence, and he invented it." Weiner paused. "At what cost though?"