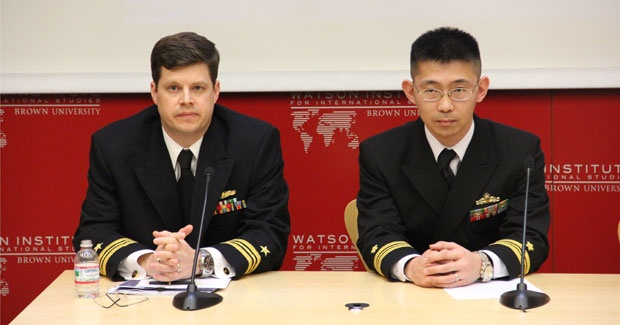 In the wake of the devastating earthquake and tsunami in Japan last year, America was quick to mobilize its military to provide relief to the disaster zone. Within hours, the US Navy had sent twenty-two ships to support the Japanese Maritime Self-Defense Forces in conducting search and rescue and humanitarian efforts over more than 2,000 square miles of ocean. This action was known as Operation Tomodachi, which means “friend” in Japanese.

Last Thursday, US Navy Lieutenant Commander Jeff Benson joined Lieutenant Commander Toshihiro Nishibata of the Japan Maritime Self-Defense Force to speak at the Watson Institute on the critical US-Japan military partnership. The lecture was sponsored by the Department of East Asian Studies and the Asia-Pacific Studies Group at the Naval War College in Newport, RI.

During Operation Tomodachi, both Nishibata and Benson were responsible for coordinating bilateral operations in support of search, rescue, and humanitarian relief efforts. They agreed that Operation Tomodachi was a great success, delivering about 260 tons of supplies, and strengthening the US-Japan military partnership.

Benson said he was impressed by the resilience of the Japanese to the disaster, and admired their resolve and courage. He also shared a number of challenges that the US Navy faced while providing relief. The most significant of these was radiation, and Benson revealed this was the first time the US Navy had conducted humanitarian operations in a radiological environment.

Nishibata expressed his gratitude for the aid provided by the US. He remarked that the effectiveness of the disaster response effort was due to the “good relationship and close coordination” between the US Navy and the Japanese Maritime Self-Defense Force. “What keeps our alliance effective is our understanding,” he said. “Our alliance is not only useful during contingencies, but it is also the foundation for stability in East Asia.”