Armageddon Letters: A New Look at the Cuban Missile Crisis

Today marks the 50th anniversary of the Cuban missile crisis, a 13-day nuclear standoff between the United States and the Soviet Union and Cuba. The Armageddon Letters, a transmedia project that grew out of collaborative research begun at the Institute, explores some of the lingering lessons and puzzles of those days in October 1962.

The latest findings of the Institute-based Costs of War project have just been released. They include a revised tally of direct war deaths across all categories of people in Afghanistan, Iraq and Pakistan over the last 11 years. 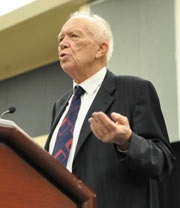 Sergei Khrushchev, past Senior Fellow at the Institute and son of former Soviet Premier Nikita Khrushchev, recalls what it was like 50 years ago when his father and President John F. Kennedy were locked in a war of nerves and the world inched closer and closer to a nuclear war.

On October 8, Syrian journalist and author Samar Yazbek was named by British Poet Laureate Carol Ann Duffy as the international writer of courage whom Duffy will share the PEN/Pinter prize. Yazbek, the author of A Woman In The Crossfire, has been an influential figure in the uprising against President Bashar al-Assad and his regime, advocating for universal human rights and lending voice to the Syrian people.

In September, Yazbek was invited to Brown by Director of Middle East Studies Beshara Doumani to talk about her book and the situation in Syria. Before the event, which was co-sponsored by the International Writers Project, Yazbek sat down with Annika Lichtenbaum '14 to discuss her experiences since the start of the revolution.

Prodi to be UN's Special Envoy for the Sahel

United Nations Secretary-General Ban Ki-moon has named Romano Prodi, professor at large at the Institute, to be his Special Envoy for the Sahel region.

Renowned scholar of South Asia Partha Chatterjee led the opening session of the Brown-India Seminar. In a talk titled "Soccer and Collective Identity in Colonial Calcutta," Chatterjee explored the racial and colonial discourses that played out between the segregated soccer teams of British India.

Lively discussion filled the lobby of the Watson Institute this morning as Botín Scholars mingled with politicians and scholars over coffee. Now in its third consecutive year, the program brings together 40 university students from eight Latin American countries and Puerto Rico who have high potential and a vocation for public service.

The Brown-India Initiative was formally inaugurated with a lecture by SM Krishna, India's Minister for External Affairs. The Initiative, housed at the Institute, is a hub for the study of modern India, engaging academics, policymakers, and other public figures to produce interdisciplinary research and contribute to public discourse.

Paulo Sérgio Pinheiro, the United Nations Special Rapporteur on Syria and a leading human rights expert, will receive the Leo Nevas Human Rights Award at the UN's Global Leadership Awards Dinner in New York next month. Pinheiro, who is adjunct professor of international studies at the Institute, currently chairs a group tasked by the UN Human Rights Council with uncovering human rights abuses in Syria.

Richard Locke comments on the inspection of a Pakistani factory that was deemed safe, by a factory monitoring group, weeks before a fire broke out killing nearly 300 of its workers.

Syrian writer in exile to speak at Watson

Yazbek, a novelist and journalist, is a member of the ruling Alawite sect but has harshly criticized the regime. Hosted by Middle East Studies and the International Writers Project, she will speak at the Watson Institute on Thursday, September 20. Her story is featured on CNN.com.

Who is Paying for Chinese Development?

Ashutosh Varshney observes that the world-class infrastructure rising on China's East Coast raises two questions: "Is China overbuilding? And who is bearing the costs of such development?"

The European Central Bank and the Federal Reserve are making the same mistake, Mark Blyth writes on the Harvard Business Review blog. Both are trying to solve a fiscal problem — stagnant growth — with a monetary instrument — the interest rate — that is already at the limit of its usefulness.

Commenting to a Discovery News reporter, Professor of Anthropology and International Studies Catherine Lutz called for more nuanced assessment of violent risk. Lutz responded to the public's dramatically increased attention to violent crime in the wake of a midnight shooting in a Colorado movie theater earlier this month."We need to ask why we're paying attention to this risk now after this one case where a dozen people died, even though that many people times 10 died in car crashes today and that many people times some number died at the hands of a partner today," she said. "We have attentional deficit disorder regarding certain kinds of violent risks."

The Watson Institute is pleased to announce expanded support for Brown students and faculty pursuing policy-relevant research in international studies. Undergraduate and graduate students and faculty at the University are invited to apply for a range of funding opportunities for the 2012-2013 academic year.

Foster to Speak at Development Conference in India

Professor of Economics Andrew Foster, a member of the Brown-India Initiative steering committee, will deliver a keynote address at a conference in Delhi this month.