In addition to meeting with students and faculty members, Prodi will participate in three public events at the Watson Institute. 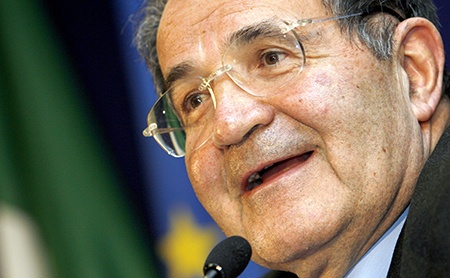 Romano Prodi speaks during a news conference at an EU summit in Brussels, March 13, 2008. (REUTERS)

Watch a recent interview on France24 >

Appointed Brown University professor at large in 2009, Romano Prodi is a former prime minister of Italy. As president of the European Commission, he oversaw the introduction of the Euro. He currently serves as the UN Special Envoy for the Sahel.

Prodi has been a frequent visitor to North Africa and the Middle East, including both Libya and Egypt, where he spent considerable time before, during, and after the Arab Spring. As the UN Special Envoy for the Sahel, he has meet with political leaders across the region, including former president of Egypt Mohamed Morsi, President Abdelaziz Bouteflika of Algeria, and Moncef Marzouki, caretaker president of the Republic of Tunisia.

A frequent commentator on many television and radio programs, Professor Prodi has spoken publicly in favor of a diplomatic approach to the Assad regime and in opposition to military strikes against Syria.

Monday, October 28: Terrorism in Sub-Saharan Africa? Perspectives on Political Crisis in the Sahel