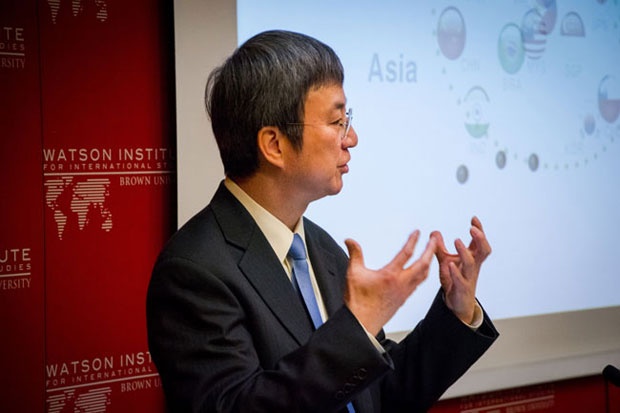 Last week, Min Zhu, Deputy Managing Director for the International Monetary Fund (IMF), gave a lecture at the Institute titled "A Changing China in a Changing World." Before joining the IMF, Dr. Zhu was a Deputy Governor of the Bank of China, responsible for international affairs and banking policy. Dr. Zhu has been influential in the internationalization and modernization of China's financial sector, and his reform-minded view of Chinese banking policy is regarded highly around the world by economists and policymakers.

After just a few minutes of Min Zhu's lecture, it becomes clear that the financial world he perceives is quite different than the physical world most of us observe. His presentation begins with an animated map of the world shifting shape, regrouping nations to reflect their economic interaction. The five continents shuffle into three financial groupings: the Advanced Economies, the Oil Group, and the Pan Asia Supply Chain. The Americas split along the Panama Canal, countries to the north grouped with the Advanced Economies and those to the south with the Pan-Asia Supply Chain. Europe, squarely in the Advanced Economies, is centered around Germany, displacing the regional divisions of the pre-Eurozone era (Eastern, Southern, and Northern Europe). Zhu's map shifts again as nations grow and shrink to reflect the volume of their international financial transactions. Now Luxemburg dwarfs many of its European neighbors and Hong Kong looms over a diminished China. The financial world he sees is dynamic, defined by fluctuating global representation and shifting economic boundaries.

The big question that Dr. Zhu sets out to answer is how will an emerging Chinese economy fit into this evolving landscape? Although skepticism and criticism of Chinese economic policy is common among western academics, it is quite rare for a Chinese economist, especially one with Zhu's global influence, to talk assertively about domestic policy reform. Yet Min Zhu does exactly that, providing timely advice for how Chinese policies can adapt to the global economy.

The limiting factor, argues Zhu, is China's tightly controlled financial system. "China's manufacturing and industrial structure is part of the world system, but China's financial structure is not. This creates a certain unbalancing." The unbalancing has sweeping internal and external consequences.

Externally, China's export-oriented manufacturing has led to its notoriously large trade surplus. If one nation is running a surplus, then others must be running a deficit. The United States, for example, had a $282 billion trade deficit with China in 2011. The Chinese government has used this surplus to buy $1.2 billion of US treasury bonds, which has further strained US-Sino relations and global trade.

Internally, the growth resulting from international trade has magnified inequality. Zhu argues that the globalization that drove China's rapid growth at the end of the 20th century has become its largest obstacle. "Globalization is good for the tradable sector, but not for the non-tradable sector. The classical development theory says you make money in the tradable sector and then go back to the non-tradable sector to invest. But now you cannot do that, because the speed today is too fast. The gap has become huge already. " China invested in capital-intensive industries, instead of paying its labor force high wages. Export output skyrocketed while household incomes stagnated.

The trend in the past few years has moved towards even more investment-driven growth, instead of increasing domestic consumption. And investment has become increasingly inefficient. Data shows that utilization of investment has dropped from 90% to 60% — for every dollar put into a project, only 60 cents of value is produced. "The purely investment-driven growth model is not sustainable. I think this is the big issue facing China today." Correcting this imbalance means getting Chinese to invest less and spend more. And in order to increase consumption, argues Zhu, Chinese reforms have to "empower the people."

The other side of Zhu's reform prescription targets the social sector. "That's one reason why the savings rate is so high: lack of a social sector — pension, health care, education — so you need to save for the future." In other words, if the Chinese government wants citizens to spend their money now, it first has to assure the people that their future is taken care of.

As a former deputy governor at the People's Bank of China, China's central bank, Min Zhu's hiring by the IMF represents a significant effort by the organization to integrate China's financial system further into international markets. Inside China, Zhu's former positions in the elite of China's financial authority put him in the unique position to give salient reform advice to the Chinese leadership. With a new, reform-minded administration in Beijing, his voice will likely play an increasingly important role in shaping Chinese financial policy.