In the few weeks following the Institute's April 12 news piece about wide-ranging conversations sparked by Mark Blyth's Austerity: The History of A Dangerous Idea, more reviews and discussions have piled up around the book.

Incoming Institute Director Richard M. Locke, currently deputy dean of the Sloan School of Management and head of the Political Science Department at MIT, authored the lead essay in a Boston Review forum on the challenge of creating "just" supply chains for global corporations.

Varshney Reflects on Boston Bombing in The Indian Express

Earlier this week, Ashutosh Varshney reflected on the bombing in Boston in The Indian Express. "Just as Delhi and Bangalore are my Indian homes, Boston is my American home," writes Varshney. Boston, he explains to an Indian readership, is an inclusive, international, intellectually rich city. "What explains that some of those who grew up in the US, went through American institutions, lived in inclusive multi-ethnic towns, even took the oath of Citizenship ... would resort to terrorist violence on US soil?"

The Watson Institute and the Center for Latin American and Caribbean Studies welcomed what Professor Richard Snyder described as a "dream team" of panelists to discuss "Rhode Island's Emerging Latino Leaders." Panelists included Ricardo Lagos, former president of Chile and Brown professor at large, Providence Mayor Angel Taveras, Mayor James Diossa of Central Falls, Dr. Pablo Rodríguez of Latino Public Radio, Ana Cano-Morales of Roger Williams University, and Pawtucket School Committee member Sandra Cano. Each spoke briefly about the experiences that led them to become leaders, the challenges that they have faced, and their advice to future leaders. Above (L to R): Lagos and Taveras.

Elias Muhanna, assistant professor of comparative literature and faculty in Middle East Studies, has been named the recipient of the 2012 Bruce D. Craig Prize for Mamluk Studies for his dissertation "Encyclopaedism in the Mamluk Period: The Composition of Shihāb al-Dīn al-Nuwayrī's (d. 1333) Nihāyat al-Arab fī Funūn al-Adab."

Ricardo Lagos, former president of Chile and the UN Special Envoy for Climate Change from 2007 - 2010, shares his hopes for a greener future. 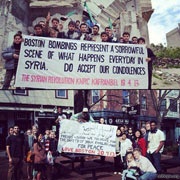 Melani Cammett: "Violence to Innocents Is a Tie That Binds"

Melani Cammett comments in the Huffington Post about landing in Beirut just as bombs exploded in her Boston neighborhood on April 15. "The irony of the situation was hard to miss," she writes. "Here I was in Lebanon, a country that Western press reports depict as perpetually on the brink of a new civil war and that has witnessed more than its share of bombings, war, and terror." The experience of watching terror unfold in her hometown and witnessing the fear and confusion at her own children's school made the horrors of daily violence across the Middle East all the more real. "Based on what our community in Boston has undergone, I can only begin to imagine the nightmares and terrors that families in Iraq, Syria, Lebanon, Afghanistan and elsewhere across the globe have experienced as violence has invaded their everyday lives. Sadly, violence to innocents is a tie that binds."

Mark Blyth warns against the imaginary thinking of austerity policy in Time's Ideas section. In keeping with the mantra of his new book, he reminds readers that austerity is a "dangerous idea: it doesn't work in the world that we actually inhabit."

The Institute is pleased to announce Neesha Nama '14 as the recipient of the 2013 Marla Ruzicka International Public Service Fellowship. With an interest in maternal and child health, Neesha will be working on a breast-feeding initiative and on an evaluation of the nutritional status of children under five years of age with AMOS Health and Hope in San Jose de los Remates, Nicaragua. Above: Revolutionary graffiti in Tunisia, photographed by Rahel Dette '13, last year's Ruzicka Fellow.

Mark Blyth has been warning the world about the dangers of austerity for years. His new book, Austerity: The History of a Dangerous Idea, questions the logic that a government can "cut its way to growth," revealing austerity policy for what it is: "nonsense."

Catherine Lutz, the Thomas J. Watson, Jr. Family Professor of Anthropology and International Studies, has been awarded a Fellowship by the John Simon Guggenheim Memorial Foundation to support work on a book about the contemporary moralities of American war.

A free public screening of the documentary Two Who Dared: The Sharps’ War, will be held at the Institute on April 16 at 7 p.m. The film was also screened last week at the Institute as part of a series of worldwide premieres occurring simultaneously at churches, synagogues, theaters, and schools in honor of Yom HaShoah, Holocaust Remembrance Day.

Melani Cammett, Dupee Faculty Fellow at the Institute, has been awarded the Mellon New Directions Fellowship, which funds scholars to pursue training outside of their own fields. Cammett, a political scientist, will train at the Harvard School of Public Health as a full-time visiting scholar and postdoctoral student. She will take coursework on health and health systems from diverse public health, sociological and anthropological perspectives during 2013-14 to further advance her current research in Lebanon, Egypt and Jordan, where she specifically examines state- and non-state providers in welfare regimes. Above: A street clinic provides free medical care to protestors in Cairo's Tahrir Square in 2011.

BIARI Alumni Return to the Institute

Participants from the 2012 Brown International Advanced Research Institutes (BIARI) were at the Institute this week to workshop the chapters of their planned edited volume entitled "Urbanization in the Global South: Patterns and Processes." Above, from left: Jakob Alberto Augusto Eichman (Brazil), Varinder Jain (India), and Sagar Raj Sharma (Nepal)

Blyth on TV: Austerity is (still) a bad idea

Mark Blyth stressed the message of his forthcoming book, Austerity: The History of a Dangerous Idea, in television interviews in Ontario and Rhode Island.

Richard Locke discusses the working conditions in garment factories around the world that prove hazardous due to the retailers' demands and quick production.

Andreas on The Diane Rehm Show

Last week, Min Zhu, Deputy Managing Director for the International Monetary Fund (IMF), gave a lecture at the Institute titled "A Changing China in a Changing World." Before joining the IMF, Dr. Zhu was a Deputy Governor of the Bank of China, responsible for international affairs and banking policy. Dr. Zhu has been influential in the internationalization and modernization of China's financial sector, and his reform-minded view of Chinese banking policy is regarded highly around the world by economists and policymakers. Read an analysis of Zhu's talk by Noah Elbot '14.

Two Years of Conflict in Syria Yields "no winners, only losers"

What is going on in Syria? What are the myths and realities of the Syrian situation? Is it a war or a revolution? Two years after the popular uprising began in March 2011, Beshara Doumani, faculty fellow at the Institute and director of the Middle East Studies program, interviewed Emerson University Professor Yasser Munif about the conflict's causes, current situation, and possible future. Professor Munif was raised in Syria and has traveled there often in the past year. Listen to their conversation.