Modi's victory is little short of an electoral revolution 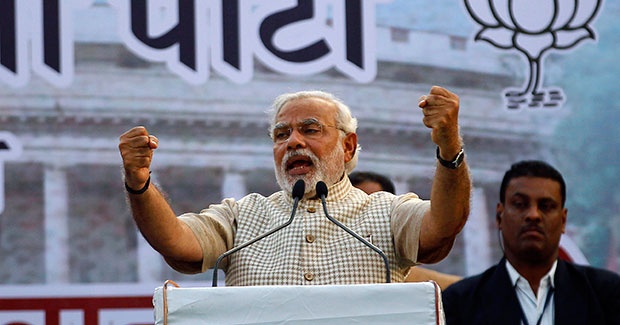 In what has turned out to be the most definitive election verdict in three decades, India has turned to the right, both economically and culturally. The Congress party, which has for decades epitomised a left-of-centre viewpoint, has been decimated, reduced to a mere fourth of its seats in 2009, turning in its worst performance since independence 67 years ago.

Narendra Modi’s victory is so decisive that it can be called an electoral revolution. No political party has won a majority of seats on its own in India’s directly elected Lower House since 1984. Indeed, no party other than Congress has done so since 1952. The victory of the Bharatiya Janata party, whose campaign Mr Modi led for eight months, has a historic quality.

His triumph is an amalgam of two factors: the enormity of anti-incumbency sentiment and his proposal for rebuilding India. The Congress-led United Progressive Alliance has ruled the country for 10 years. Incumbents in modern democracies are rarely elected a third time.

But this was no normal anti-incumbency. The corruption of India’s incumbents scaled new heights over the past 10 years, drawing comparisons with the Gilded Age of the US. And while the Nehru-Gandhi dynasty had some relevance in rural India, the notion of dynastic rule has become increasingly untenable in conditions of rapid urbanisation.

Mr. Modi has a reputation for incorruptibility. That he is the son of a tea seller was a significant campaign theme. India has had plebeian politicians before but no one has challenged the Nehru-Gandhi dynasty so frontally in a campaign.

The Congress party campaigned on the basis of the pro-poor policies its government put in place in recent years. In an urbanising India, a rising middle class was unlikely to receive this message of social welfare enthusiastically, not least because it has hurt economic growth, but it appears that the pro-poor policies have not gone down well with large segments of the poor either. Corruption has hobbled the execution of such programmes, making their benefits invisible to the poor in many parts of India.

Mr. Modi believes in using markets to deliver incomes for the poor. He presented his economic argument in a clear and simple manner in the campaign. In a rally in Varanasi last week, he linked the uplift of the poor with the cleaning of the Ganga, a river highly polluted but considered dear, even sacred, by millions for spiritual reasons. Mr Modi argued that agriculture rarely grows above 3-4 per cent annually and manufacturing 7-8 per cent, but tourism can lift an economy by a significantly higher rate. A cleaner Ganga, he said, would encourage tourism, increasing the incomes not only of hotel owners, but also of fruit and flower sellers, rickshaw pullers, weavers, hawkers and thousands of others. In a city feeling battered by low growth, declining tourism due to a polluted river and a lagging textiles industry, this interlinking of business, spirituality and welfare resonated well. The middle classes, too, consider Mr Modi eminently capable of resurrecting India’s growth story.

Mr. Modi may belong to India’s economic right-of-centre, but he is also linked to the cultural right. This has caused enormous anxiety among Muslims and liberals. Mr Modi’s political upbringing was in the Rashtriya Swayamsevak Sangh, which is known for anti-minority virulence and an unwavering intolerance of liberalism. In this election, the foot soldiers of the RSS were Mr Modi’s biggest campaigners, travelling far and wide, knocking at millions of doors. Deepening the anxiety are the anti-Muslim riots of 2002, when Mr Modi headed the state administration in Gujarat. Though he has not been found legally culpable, a dark cloud continues to hover over his political record.

What will be Mr Modi’s relationship with the RSS once he is in power? Will he tame the RSS, or will the RSS enjoy freedom and power under his rule? If the former, India’s economic growth will almost certainly be restored. But in the event of the latter, serious governance problems should be expected. India has more than 150m Muslims. They might not have been able to stop the rise of Mr Modi – some even voted for him – but it is inconceivable that India can be governed well if a minority of that size feels systematically marginalised or humiliated.

How Mr Modi’s relationship with the RSS and Muslims evolves will have serious implications for his project of India’s economic resurrection.

The writer, Sol Goldman Professor of International Studies and the Social Sciences at Brown University, is the author of Battles Half Won: India’s Improbable Democracy