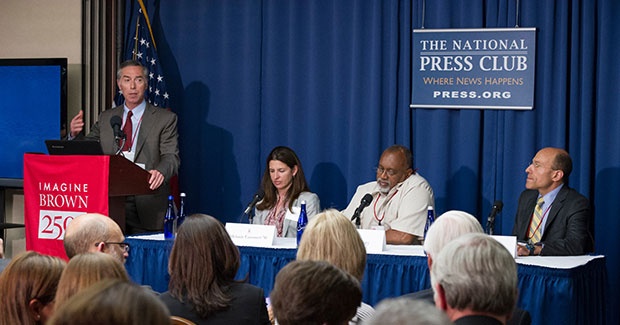 On June 9, Brown alumni and friends attended a series of events at the National Press Club, hosted by Brown and the Watson Institute as part of Brown's 250th anniversary celebration. The event, "Creating Peaceful, Just and Prosperous Societies", featured US Secretary of Labor Tom Perez '83, who delivered the keynote to a standing-room-only crowd of 130 people. Perez's speech, which focused on workers' rights to fair wages, was followed by a panel of Watson experts. Faculty fellows Melani Cammett, Glenn Loury, and Edward Steinfeld (pictured above) each gave highlights of their current research, on the political economy of the Arab uprisings, incarceration rates in the US, and energy technologies in China, respectively. The panel was followed by a reception celebrating Brown's 250th, which was attended by 300 people.