Costs of War Research Shows War Related Deaths in Afghanistan and Pakistan at 149,000 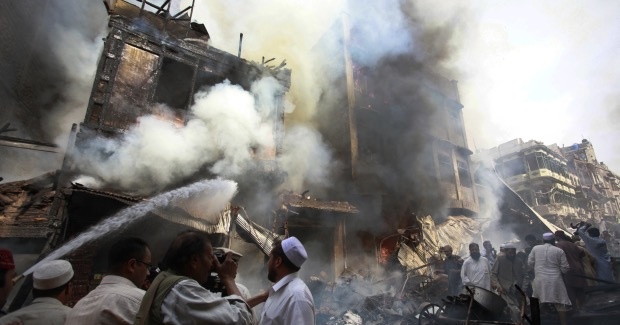 These are just a few of the results that have been recorded in a new paper produced by the Costs of War project at Brown University’s Watson Institute. “War Related Death, Injury, and Displacement in Afghanistan and Pakistan 2001-2014,” by Boston University Political Science Professor and co-director of the Costs of War project, Neta C. Crawford, documents 149,000 direct war deaths among Afghanis and Pakistanis, including civilians, national police and security forces, and opposition forces, such as the Taliban. The report further notes that local and international organizations have recorded an additional 162,000 people who have been seriously injured in the fighting, adding that war violence, the resulting displacement of individuals from their homes, and destruction of the environment and public services have also contributed to an untold number of indirect deaths from malnutrition, disease, and lack of access to care.

“This report is the latest in our ongoing documenting of the significant human and financial consequences that the post 9/11 wars have had on the United States,” said Catherine Lutz, Brown University Professor and co-director of the project. “This report reminds us that the citizens of Afghanistan and Pakistan have also suffered staggering untold and irreparable losses.”

Illness, disability, and death as a result of environmental destruction and depleted infrastructure are also urgent problems in Afghanistan, according to the report. Near constant war since 1979 has affected water systems as well as services such as health care.  “Afghans are dying from malnutrition, lack of clean drinking water, injury, and disease,” notes Crawford, adding that, “People who are displaced from their homes are particularly vulnerable to indirect death.”

Beginning in 2003, the Afghan Ministry of Health, in conjunction with the International Red Cross, United Nations agencies and other international groups, developed a Basic Package of Health Services (BPHS), which aims to increase health care resources available to Afghans, and especially Afghan women and children. Maternal, infant, and child mortality have declined since then, but other problems have escalated. The incidence of tuberculosis rose between 2008 and 2013; the rate of disabilities that are war-related remains significant at 17 percent; and anxiety, depression, and PTSD related to war and its aftereffects are epidemic, with few mental health care providers available to serve Afghans.

The closely related armed conflict in Pakistan has also killed tens of thousands of people, including at least 21,500 of civilians. Crawford points out that several related armed conflicts are currently underway in Pakistan: attacks by the Pakistani government targeting militant groups; US drone strikes targeting militant groups; and militant groups attacking the Pakistani government, and frequently, civilians. “Civilians in Pakistan’s northwest and throughout the country commonly fall victim to violence by all parties of the fighting,” notes Crawford.

Local and international estimates of US drone casualties vary widely, with groups estimating anywhere between 1,900 and 3,800 people killed, and anywhere from 5 to 73 percent of these civilian deaths. “What is certain,” says Crawford, “is that drone strikes disrupt peoples’ livelihoods, destroy infrastructure … and as a result, contribute to displacement, malnutrition, and disease. “

Since 2004, millions of Pakistanis have been on the move, both internally displaced and in neighboring countries. Refugees are particularly vulnerable to indirect deaths, but it is difficult to estimate these deaths among those internally displaced in the Pakistani border region, where media and humanitarian access is tightly restricted.

“It is important for policy makers and others to view the effects and implications of these wars together, because they are so interconnected,” advises Crawford.  Refugees from each country have crossed the border into the other, and many lack basic provisions such as shelter. The US drone strikes target anti-government forces who have fled Afghanistan as well as opposition groups such as the Pakistani Taliban. US support for the Pakistani ground war against opposition forces causes casualties and displacement in both Pakistan and Afghanistan. Finally, international military forces have transported food, fuel, and equipment through Pakistan to Afghanistan, and militants have repeatedly attacked these supply vehicles, leading to hundreds of civilian, military, and police casualties.

About the Costs of War Project

First released in 2011, the Costs of War report has been compiled and updated by more than 30 economists, anthropologists, lawyers, humanitarian personnel, and political scientists as the first comprehensive analysis of over a decade of wars in Afghanistan, Iraq, and Pakistan. The Costs of War Project at Brown University’s Watson Institute for International Studies analyzes the implications of these wars in terms of human casualties, economic costs, and civil liberties.

About the researcher: Neta C. Crawford is Professor of Political Science at Boston University and Co-Director of the Costs of War Project.