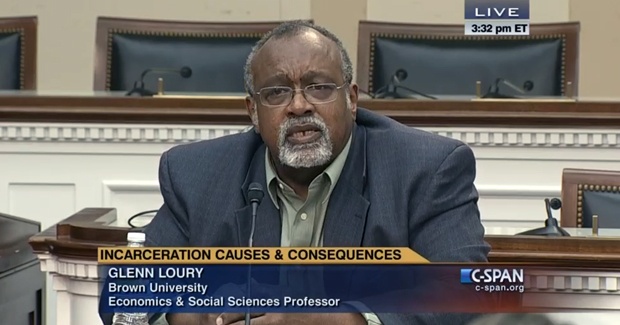 Watson Faculty Fellow and Merton P. Stoltz Professor of the Social Sciences Glenn Loury participated in a Congressional briefing on The Growth of Incarceration in the United States: Exploring Causes and Consequences, a recent report released by the National Academy of Sciences (NAS).

Providence, RI – On Tuesday, May 26, 2015, Watson Faculty Fellow and Merton P. Stoltz Professor of the Social Sciences Glenn Loury participated in a Congressional briefing on The Growth of Incarceration in the United States: Exploring Causes and Consequences. The report, recently released by the National Academy of Sciences (NAS), examines the origins and impacts of the high incarceration rates in the United States.

Over the last four decades, incarceration in the United States has risen to a historically unprecedented level, unmatched anywhere in the world.  Among the implications: From 1980 to 2009, the combined spending on corrections by the states grew 400%. And, with 5% of the world's population, the US houses 25% of the world's prison inmates.

Imprisonment has become a central element of American social policy, with vastly disproportionate effects on poor and minority communities. In 2012, with support from the National Institute of Justice and the MacArthur Foundation, the National Research Council of the National Academy of Sciences impaneled a group of experts to examine the causes and consequences of this unprecedented transformation. The result is the Growth of Incarceration report, which, according to its summary, “found no clear evidence that greater reliance on imprisonment achieved its intended goal of substantially reducing crime.”  It further points out that, “…the growth in incarceration may have had a wide range of unwanted consequences for society, communities, families, and individuals.”

Loury, a prominent social critic who writes mainly on themes of racial inequality and social policy and speaks regularly about his research on race and US incarceration, served on the National Research Council’s study panel that led to the report. He will join NYU Professor Lawrence M. Mead and Temple University Professor Heather Ann Thompson to discuss findings from the report with staff members from the US House Judiciary Committee.  Together, the panelists will address the conclusions that can be drawn from the research to inform policy discussions on the use of incarceration and alternatives.

The briefing was televised on CSPAN.