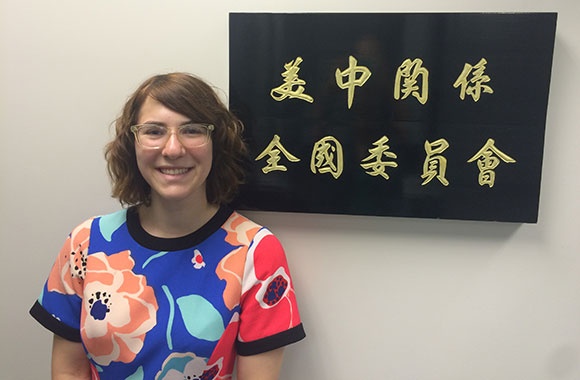 "Presenting the knowledge in a way that would be helpful for those with little background on China or U.S.-China relations proved initially difficult, but it was incredibly rewarding."

Why did you choose to spend your summer working with the National Committee on US-China Relations?

In the Summer of 2014, I worked with Stepping Stones, a Shanghai-based nonprofit that aims to improve the education and general welfare of disadvantaged, migrant children in China. The NGO collaborates with expatriate and local Chinese volunteers to teach English in Shanghai’s migrant schools and community centers. In my time with Stepping Stones, I learned so much about educational policy in China, as well as the problems facing disadvantaged groups and the role of NGOs there. However, I felt that I needed to better understand the broader geopolitical forces and relationships within which NGOs like Stepping Stones work, which led me to the National Committee. The National Committee on United States-China Relations promotes understanding and cooperation between the United States and China with the belief that sound and productive Sino-American relations serve vital American and world interests.

What work did you do with the Committee?

Since 1966, the National Committee has been famous for fostering student, congressional, and leadership exchanges between China and the United States, most notably their organization of President Nixon's visit to China. Today, they run the Fulbright-Hayes Teacher Exchange, Student Leaders Exchange, Professional Fellows Program, and many congressional delegations, among other programs. All of these programs have a packet of pre-program information, including a "briefing book," which is a collection of non-partisan news and academic articles on various facets of China's development, society, and geopolitical relationships. Since the Committee assumes that many of the program participants are entering these programs with little knowledge of China, the briefing book has to impart lots of knowledge through very few articles (for example, the section on U.S.-China Relations had anywhere from 5-7 articles). I was given full responsibility for curating this year's briefing books for Fulbright-Hayes, Student Leaders Exchange, the Professional Fellows Program, and an upcoming congressional delegation. Presenting the knowledge in a way that would be helpful for those with little background on China or U.S.-China relations proved initially difficult, but it was incredibly rewarding.

What are your plans after college?

I eventually hope to get a law degree focusing on international human rights law, with the intent to become a legal advisor to NGOs, such as Stepping Stones, working to lessen educational inequalities in China and worldwide. In the meantime, however, I'm planning on pursuing a Masters Degree focusing on Migration Studies or Contemporary Chinese Studies, in order to give me greater knowledge in the fields I would ultimately like to pursue.