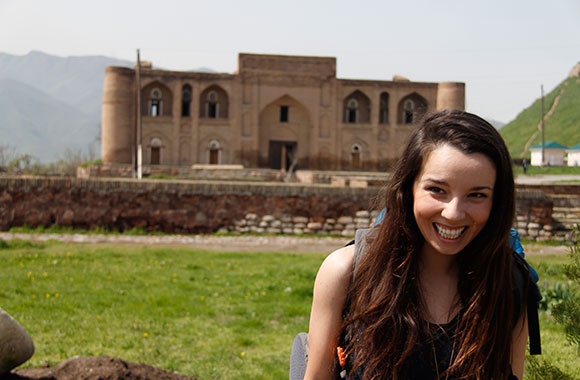 When did you first travel to Tajikistan?

The first time I traveled to Tajikistan was in the summer of 2012 on a Critical Language Scholarship to study Persian language for two months. I knew that I wanted to study a Middle Eastern language when I arrived at Brown, and I ended up choosing Persian because it was easier than Arabic, and I loved the teaching style and small class sizes of Brown's Persian program -- led by the amazing Iraj Anvar. I fell in love with the country and ended up applying for a Boren Scholarship and Demers Fellowship two years later to go back to Tajikistan for seven more months of immersive language study. Happily, I won both grants and returned to Tajikistan in January of 2015. There, I spent four to eight hours a day in one-on-one language, culture, history, media and religion classes with Iranian teachers. I was especially privileged both to explore Persian-language research methods in online religious archives, and to join one of my teachers on multi-day journalistic field trips to Tajik villages where she was helping her field partner film documentaries on Tajik folk music and village life. I was inspired by her to start planning my own academically-informed journalism projects in Tajikistan, and I will return to the country at the end of December of this year to begin working on those.

What prompted you to pursue journalism?

For a long period during my time at Brown, I had thought I wanted to work for the Department of State, implementing American policy abroad and, because I've been educated in a tradition that's quite critical of the American imperial project, trying piece-by-piece to reform those policies which I opposed from within the bureaucratic structure. I was extraordinarily lucky to work as an intern in the U.S. Embassies in Ankara and Nicosia, in the political-military affairs office and Ambassador's office, respectively, in the summer and autumn of 2014. One thing that struck me was the reliance of Foreign Service Officers on detailed, comprehensive journalistic reports to shape and color their understanding of the local environment in which they worked. I started to think that maybe, if I wanted to have a greater influence on the implementation of American foreign policy, perhaps I should consider journalism...which was great, because I had wanted to be a journalist since I was 10 and had only, with great reluctance, resigned myself to pursuing government work. I see journalism, and especially the type of academically-informed, ground-level, multimedia journalism that I follow and hope to begin producing soon about Tajikistan, as having an inherent social justice mission, in terms of its democratizing and contextualizing nature.