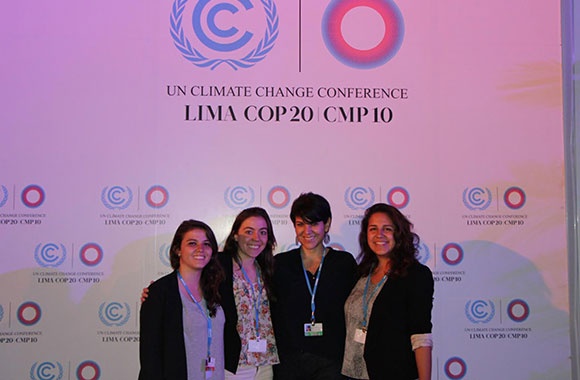 “It is our generation that is going to see the worst impacts. It’s also our generation ideally that will come up with the solutions to address the problem.”

Maria Camila Bustos ’16 wants environmentalism to become mainstream. As Executive Director of EmPOWER, Brown’s umbrella environmental organization, she hopes to get students fired up about climate change with an evening of speakers and live music on the Main Green on Friday, October 2. Brown is one of more than 50 universities around the country staging events as part of Know Tomorrow, a national student-led day of action on climate change started by Cool Globes founder Wendy Abrams ’87 and Al Gore’s Climate Reality Project.

“For this issue, we don’t want to be alienating,” says Bustos. “We decided to do a concert and have local bands. The idea for this is we want everyone to be there.”

The evening’s lineup features several bands including What Cheer? Brigade, Young Hummus, Sons of Providence, Sports Footage, and Sebastián Otero. Human Rights activist Kerry Kennedy will speak, as will Voces Verdes: Latino Leadership in Action. A video message from Senator Sheldon Whitehouse will address the role of young Americans in the fight against climate change.

“Climate change is an issue that affects young people the most,” says Bustos. “It is our generation that is going to see the worst impacts. It’s also our generation ideally that will come up with the solutions to address the problem.”

It’s an important time to focus on this issue, she adds, because of the United Nations conference on climate change in Paris later this fall. For the Know Tomorrow event, “The messaging is basically around climate action by U.S. leaders, given that the U.S. is still one of the most important greenhouse gas emitters, also known for stalling the negotiations and for sometimes not being as ambitious as it could be.”

Bustos believes that climate change impacts the most vulnerable and most marginalized communities around the world; it’s not just an environmental issue, it’s also a social justice issue. “For me, what makes climate change the biggest challenge that my generation will face, is facing, is that it’s tied to everything—to our economic, political, and social life.”

“That’s what we’re trying to get out,” she says. “This is a thing we should all really care about.”

Unrelated to the Know Tomorrow concert, a Saturday conference will follow: the Rhode Island Youth Summit on the Environment (RYSE), which started last year. A keynote speaker from Voces Verde will address participants over a lunch of flatbread pizza, says Bustos, and workshops will include “Understanding the New Energy Marketplace”; “Illicit Economies and Environmental Degradation in the Global South”; “Resistance to Fracked Gas Infrastructure in RI”; and “How Environmental Justice Can Become Racialized and What We Can Do About It.” “Diversity and the Environment: A Call to Action” will examine why minorities are underrepresented in environmental organizations and institutions.

“I feel that as a leader of EmPOWER,” says Bustos, “if we don’t mainstream environmental issues, if we don’t actually become a diverse movement, we won’t stand a chance in any of the fights.”

Focusing on climate change is not new for Bustos. She received a Royce Fellowship to conduct research on her thesis topic, Colombia’s Foreign Policy on Climate Change. Last summer she interned for Dejusticia, a human rights think tank in Bogotá, where she wrote a case study about human rights and coal extraction. During the previous summer, she worked with Timmons Roberts, Ittleson Professor of Environmental Studies and Sociology at Brown, on Rhode Island’s first climate change law, the Resilient Rhode Island Act of 2014.

Future plans are to become a human rights or international environmental lawyer, with climate change front and center. “I think it’s very serious,” she says. “This is what I do, this is what I want to do for the rest of my life.”