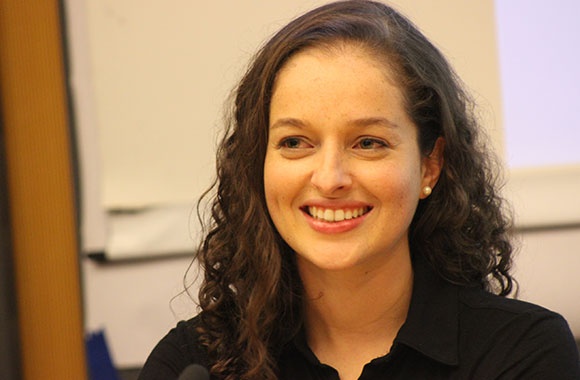 Silvia Cabral Teresa recently spoke at a roundtable hosted by the Brazil Initiative on the current social, political and economic crisis in Brazil.

What was the roundtable about?

The roundtable’s title was “Political and Social Unrest: A Roundtable on the Current Brazilian Crisis”. The panelists were myself, Moisés Costa (a 2nd year Ph.D. student in Political Science), Mila Burns (News Anchor for Globo TV International) and Roquinaldo Ferreira (professor of History and Brazilian Studies at Brown). I am not a political scientist, a historian or an economist, so I was very surprised albeit happy to be invited to be on this panel. What I tried to offer to the audience was some of my thoughts and perceptions of what is happening in Brazil through the lenses of a student and a citizen who has been following everything mainly through the media and also through talking to family and friends who remain in Brazil.

What is your take on this issue?

Well, I cannot help but think that, since 2013, everything in Brazil has become yet more complicated. Historical time seems to have accelerated in the country, the situation is constantly changing, and there has been a fundamental change in our regime of visibility, with the reorganization and strengthening of activism from various sectors of society. However, it is important to notice that Brazil is not alone in terms of the political issue. We are seeing a global crisis for traditional systems of representative democracy as a result of corruption (which is simply more exposed because now people have greater access to information and better organizational skills thanks to the internet). The Brazilian political system is struggling along the same lines as many other systems in the world, clearly because citizens can no longer accept that their political power is restricted to one vote every four years. There is a chronic dissatisfaction with the entire political class. The wave of protests in Brazil is not a programmatic movement (although there are several concrete problems), but an emotional one; what people are asking is for recognition. Right now, there is no rule of law; instead, there is the manipulation of law to maintain a patrimonial state -- and that is why I tried to address in my talk two of the main points that, in my opinion, have contributed to this extreme situation: the ultra-conservative agenda in the Chamber of Deputies (and the frightening power of its president, Eduardo Cunha) in the past year, and the costly setbacks in Education.