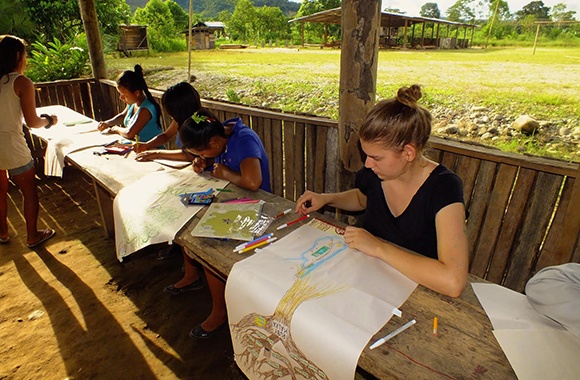 "I spent a lot of time with the communities discussing ideas on how to help their children maintain their cultural identity something which is very important in the context of land disputes."

How did you become interested in Latin American Studies?

I actually became interested in Latin American Studies following a study abroad program  that I did the Spring of my Junior Year. Because it lined up with certain personal values, I took part in the Rehearsing Change Study Abroad Program which is based in Ecuador. It is a “Fair-trade” study abroad program that brings together local Ecuadorians who might not be in academia together with international students to study and explore issues of development, sustainability, identity and globalization. We also used art-theatre, music,dance- as the medium to engage with these issues. During my time abroad, I did a global independent study with Professor James Green on the role of technology in indigenous communities in Amazonian Ecuador.

What did you do over this past summer?

Thanks to a LINK award, I spent the summer working with Pachaysana, the organization that organizes the Rehearsing Change Study Abroad Program. I spent time with two indigenous communities, the indigenous Kofán community of Dureno, and the indigenous Kichwa community of Tzawata, working with community members to investigate conflicts between the preservation of traditional identity and the pressures of a globalizing world. In the community of Tzawata, for instance, I co-facilitated workshops for youth about preservation and use of the Kichwa language. In Tzawata, preservation of their culture is a political as well as personal necessity. The community of Tzawata is located on land that is owned by a Canadian Mining Company, who has been trying for many years to evict the families off their land, using both legal means and physical force. In Ecuador, indigenous communities have rights to reclaim their traditional lands. In order for this to take place, however, the community must prove to the government that their are indigenous to their land. In Tzawata, this means that gaining ownership of their land rests in large part on their ability to "prove" their culture to outsiders.