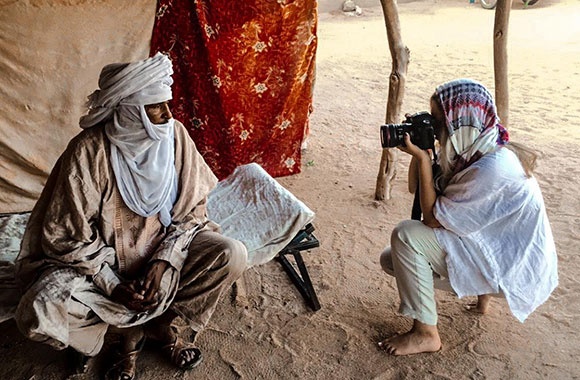 Tell us about your award-winning Multimedia investigation on the refugee crisis. Where was your project based, and what were your inspirations?
It was probably my most ambitious project, in that my co-reporter Malia and I were venturing to 5 countries in 3 months to uncover the profit-systems that had emerged in the wake of the refugee crisis. The piece, ‘The 21st Century Goldrush,’ takes a look at the folks getting rich off the crisis in four hotspots, from smugglers and pimps in Niger, to mafioso skimming refugee camps in Italy, refugee-camp entrepreneurs in Germany to factories that employ child-workers in Turkey. The idea was to understand the refugee crisis from a sense of long-term impact. There had already been so much excellent reporting on the plight and journey of refugees and the problems of integration, so we were looking to shed light on the crisis through a more macro-lens. A lot of the reporting happened on the ground as these emerging, and most often illicit, economies had not yet been thoroughly investigated.

How did your time at Brown inform or impact your current work?
To start, I had incredible mentors who encouraged me to engage in interdisciplinary work, both academically and within my journalistic interests. Keith Brown, Rose McDermott, Stephen Kinzer, Erik Ehn, John Terry and Tracy Breton, to name a few. My mentors themselves were in different disciplines, anthropology, political science, playwriting, film and journalism respectively, so this inspired me to always consider multi-disciplinary approaches to my subjects. Brown also allowed me to forge my own path, which very much mirrors my career. At Brown I took my own courses, made up my own concentration and created a number of independent projects that helped me developed the necessary skills to create a “choose-your-own-adventure” career. In my first job at the Huffington Post, for instance, I was their first ‘multimedia’ reporter, and no one really knew what that meant, including myself, so I just made it up as I went along deciding on the projects I wanted to do, pitching them and making them happen. A year later, I pitched myself to the incoming longform editors to create direct and report for their new venture and together we created Highline, the Huff Post’s longform investigative mag. The entire process of creating Highline in its first two years was a “throw-stuff-at-the-walls” type of experiment. It would also be hard not to mention that Erik Ehn let me tag along with him to Rwanda after my freshman year. That experience was transformative and as an 18 year old I was able to interview genocide perpetrators in prisons, survivors and President Kagame himself. This certainly informed my path and I’ll always be indebted to Erik and my other fantastic mentors.