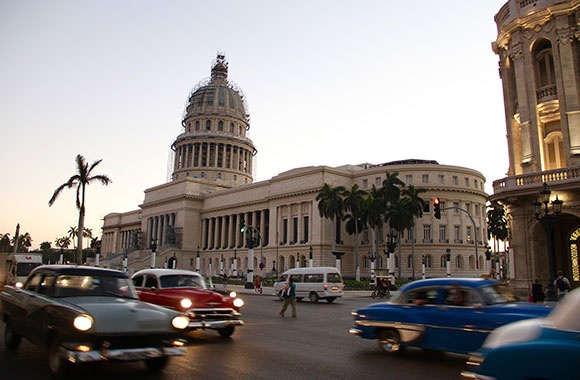 Ten Brown students travelled to Cuba earlier this year as the culmination of their senior seminar "International Journalism: Foreign Reporting in Practice." Each student investigated a different aspect of Cuban life with the guidance of Professor Stephen Kinzer, a former New York Times foreign correspondent. Read excerpts below from the student blogs.

Santeria: A Religion of Resistance, Secrets, and Solidarity

For centuries Santeria was suppressed. Spanish overlords feared its power.  Communist leaders scorned it as primitive superstition. Nonetheless it survived underground. Now, as restrictions on Cuban life ease, Santeria has re-emerged as a major force in Cuban society.

African slaves brought Santeria to Cuba centuries ago. Since then it has evolved into a combination of the Yoruba religion of West Africa and Spanish Catholicism. Devotees seek good health and moral guidance from orishas, or spiritual deities.  Often they practice cleansing rituals and ceremonies that summon the deities’ magical powers. These rituals, devotees say, increase their self-esteem and help them understand the mysteries of life.

The vacation rental site has paved a new path to prosperity for Avaricio Lopez and thousands of other Cubans. Despite its promise, however, Aribnb is now facing the bureaucratic and political hurdles that confront many businesses in Cuba, reflecting this country’s conflicted relationship to private enterprise.

Tourism is booming here, but hotel space is chronically inadequate. That provided an opportunity for Airbnb, which arrived in 2015 after the Obama Administration announced plans to restore diplomatic relations with Cuba. When President Obama came here in 2016, he brought the company’s co-founder, Brian Chesky. Both spoke to a group of budding Cuban entrepreneurs.

“Around the world,” Obama told them, “entrepreneurs flourish when there’s an environment that encourages their success.”

The Revolution Will Have Sequin Dresses

Behind a modest façade in this provincial capital, a group of drag queens stepped onstage with shimmering gowns pulled taut around their muscular frames. “Welcome, cretins!” one of the drag queens cried out as the show began. She was met with a deafening cheer.

Scenes like this are a common sight at El Mejunje, a local bar whose name translates to “the mixture.” Every Saturday night, members and allies of Santa Clara’s LGBT community come together for this lively show. Groups of patrons mingle in front of a maroon wall inscribed with haphazard anarchist symbols and scrawled phrases like, “Living well is the best revenge.” The smell of sweat, diesel, and alcohol permeate the bar’s open courtyard.

This scene reflects the energy that is surging through Cuba’s LGBT community. Despite a long history of persecution and continued discrimination, LGBT Cubans have emerged to claim a place in the national community—and they are doing it with gusto.

Like the rest of Cuba, Havana’s Chinatown has gone through massive upheaval in the last century. Once home to one of the largest Chinese populations in the Western hemisphere, Cuba now has only about 110 native-born Chinese people. Yet although the Chinese population has dwindled to almost nothing, Chinese culture is thriving in Havana’s “Chinatown without Chinese.”

Chinatown is a tourist hotspot. Many stores and bakeries still retain Chinese-derived names left over from previous owners, though most sell mainly Cuban products and desserts, like flan or tres leches. Some of the “Chinese” restaurants actually serve Italian food. For some Cubans, any kind of unusual foreign food is automatically thought of as Chinese.

On a recent Sunday afternoon, eager groups of Cubans clustered around their tablets and iPhones at Parque Vidal, a Wifi hotspot in this provincial capital. Not all of them, however, were connected to the internet.

The difference would not be clear to an outsider. An off-duty soldier who was sitting in the park, Reiner Guerra Peres, saw it immediately. Cubans with relatives outside the country, he said, receive money and can afford internet access cards. Others, like him, use their phones only to store photos and make local phone calls.

“It is easy to tell who has family in the United States,” Mr. Guerra said, using his Samsung smartphone to gesture to a family on the next bench that was video chatting on their iPad. "Everyone who’s on the internet here, they know people on the outside. Outside money makes this possible.”

The Luxuries of Produce

For many Cubans, finding enough to eat has become increasingly difficult. The changing economic system, along with a tourist onslaught, has brought prosperity to some but left others scrambling for food.

“For a Cuban like me, it’s too expensive,” said Angela, a 57-year-old peanut vendor at a Havana park.  “That is Cuba’s biggest problem, and it’s only going to get worse.”

Cuban agriculture has struggled to meet demand for decades. The continuing US trade embargo and the 1990 collapse of the Soviet Union, Cuba’s main trading partner, have left the island unable to import fertilizers, pesticides and food. The Cuban government has also failed to administer its state farms, which cover over 70% of agricultural land, efficiently enough to produce what Cubans want and need.

Marriage is dying out in Cuba. People still fall in love, move in together and share their lives, but few bother to marry.  Most couples now forego the paperwork that would formally bind their union.

Part of the reason is the declining role of Catholicism in Cuban life. Marriages were traditionally church ceremonies, and bitter clashes between the revolutionary government and Catholic prelates helped create an official antagonism to all things religious.

As formal marriages have become less common, the glittering weddings that used to mark them have also become scarce. Marriages were once performed in many different rooms at the Wedding Palace building. Now only two small salons are necessary.

Towering images of revolutionary leaders have monopolized Cuban skylines for years. They dominate streets and squares in every city and town.

After the country’s longtime leader, Fidel Castro, died last year, the government ordered walls and billboards plastered with the slogan “I am Fidel” or “We are Fidel.” This was the latest in a long line of government campaigns that use public spaces to convey political messages.

Some Cuban artists who feel unhappy with political or social conditions, however, dare to post their own messages on walls. Some are strikingly provocative.

Nail Polish and Empowerment Shine at In-Home Salons in Cuba

In-home beauty salons have given many Cuban women an opportunity to participate in the new dynamism of small business here.  They allow female owners with little formal training to turn a girlhood hobby into an empowering economic venture.

A few bottles of nail polish, a padded chair against a sink, the right license and some business savvy have landed many women their own businesses—something that would have been hard to imagine just a few years ago.

A Look Into the Cuban Tech Scene

Many of the first Cuban-designed apps were aimed at tourists. One of the most successful iis Alamesa, which which provides a directory of high-end Cuban restaurant. Now, however, more provide information that Cubans can use, like tips on how to pass the driving-license test.

When it comes to internet-based entrepreneurship, Cuba remains clearly behind the rest of the hemisphere. Technical obstacles are considerable. The government remains suspicious of the web and its subversive potential. Business culture is weak. Nonetheless, the tech scene is energetic and growing.