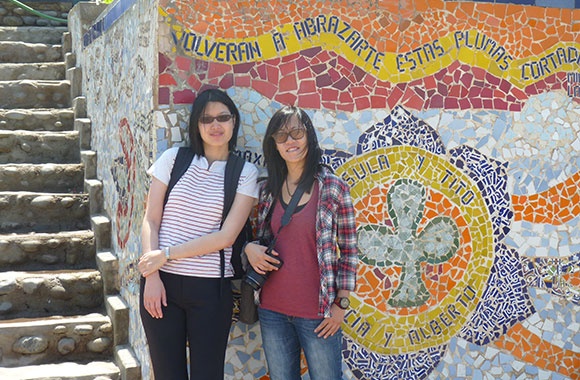 Tell us about your research.  What does it focus on, and what were your inspirations?

My project examines the foreign relations between Peru, Paraguay, Panama and Taiwan (ROC), specifically between the years of 1960-1975. I was inspired by the fact that there was not much [existing] research that looked at those four countries in conjunction during that time period.

I wanted to not write a US-centric dissertation, because the bulk of secondary sources are focused on bilateral US relations with other countries in the "Global South", and I wanted to show that Latin American history doesn’t have to be all about US influence in Latin America, but that these countries are independent actors.

The most exciting experience was in 2012, when I went to Peru to study the Japanese internment in the United States during World War 2. I met a man who was actually a former ambassador while I was sifting through archives. I told him about my project and he introduced me to possible sources I wouldn't have known to research. I went back in 2014 and he was, coincidentally, there again in the archives, and I told him about my ongoing project and he showed me his personal pictures and related documents that were incredibly relevant. Again, I wouldn’t have found them or gotten access to them otherwise. Later on, someone else I met in the archives knew someone who worked in a Peruvian ministry and they managed to help me get access to classified documents that I otherwise would have had no chance at finding. I was one of the few non-ministry employees to look at the these reservado documents.

How has the Watson institute, and the Cogut Fellowship specifically, shaped, impacted, or informed your research?

Watson is fantastic in that it offers an invaluable support system; they host a lot of different talks, some by other graduate students like myself, and going to a talk often changes my own perspective on my research and how I'm approaching it. You can look at the problem from a different way. It's also nice to know that somebody cares about what my project is about. Even though there are sometimes very few direct links between some of the talks' subjects of research and my own, it is still nice to know that there are people that will eventually care about this and that can take something from the travels that I have done.