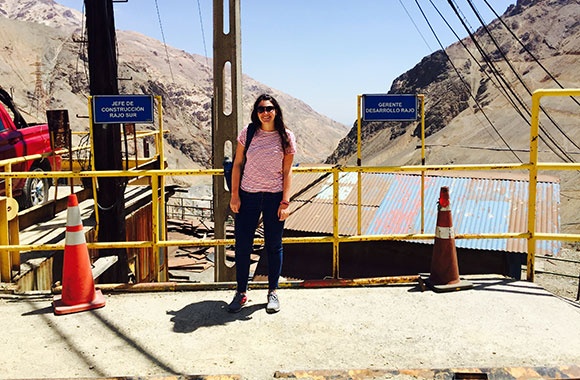 How did you decide on your thesis topic?

I studied abroad in Chile the fall of my junior year. That’s when I learned that copper is incredibly important to the Chilean economy. Everyone talks about it. Everyone, from my host family to the cab driver knew where copper was trading. My program took a trip to a copper mine, El Teniente, up in the Andes Mountains that was once owned by an American company until it was nationalized in the seventies. The US mining company built a company town called Sewell, where the miners and their families lived. While there, I noticed that housing had been strictly regulated. For example, there was separate housing for single miners, and housing for miners with families. That’s kind of how I started thinking about my thesis.

What exactly is the thesis about?

My thesis is about the women and families who were living in the El Teniente copper mine from 1904-1930. During its existence, the mining town became a kind of cultural enclave of Chilean and US values. Basically the company wanted to incentivize marriage because miners would be more likely to stay in the mine if they were in stable families. So, the company created a series of rules and regulations that pertained to marriage and family life that had to be followed for miners and their families to live and work in the mine (they received free housing from the company). The rules and regulations weren't created in a vacuum, but were the product of different mindsets and values in both the United States and Chile. My thesis is taking a comparative look at middle class family life in the US and Chile, to try and trace the formation of the rules, infrastructure and governance of the mining town. More specifically, I'm looking at 1) why the rules were created, 2) how Chilean and US culture influenced the creation of the rules and 3) how the rules actually affected the women and families living in the mine.