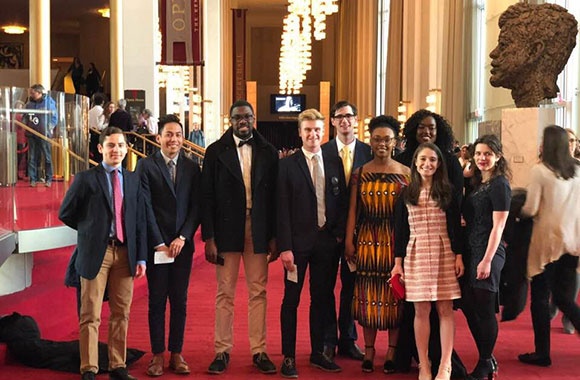 Spring 2018 at the Kennedy Center.

“Brown’s Best-Kept Secret that Shouldn’t be a Secret”

“Eye-opening,” “top-notch faculty,” “intellectually fulfilling,” “rewarding.” These are just a few of the ways participants describe the Brown in Washington Program, an immersive semester-long experience blending academics, a public service internship, and robust co-curricular experiences. A partnership of the Swearer Center and the Watson Institute, the recently launched program “opens the doors for students who want to work in the public sector -- be it politics or in public policy,” says Jennifer Romano ’06, MPA ’07, the Swearer Center's Associate Director of Academic Engagement. “This is the time to be in D.C.… to be a part of change for the better.”

Romano, who was a political appointee in the Obama Administration, believes “anyone with a passion for public service … and wants experience working on policy” will benefit from this experience, stressing that it is open to Brown juniors and seniors in all concentrations. In addition to the course work, internship, and co-curricular experiences, the program includes skills trainings, such as professional media and public speaking coaching, extensive networking opportunities, and peer-to-peer learning experiences with fellow program participants.

The Executive Office of the D.C. Mayor, the Bureau of Land Management, the Embassy of Canada to the United States, the Mexican American Legal Defense and Educational Fund, the National Organization for the Reform of Marijuana Laws, the Brookings Institution, and congressional offices have been among students’ internship sites. Brown in Washington program staff support students as they secure their internships, connecting them with resources and leveraging their extensive networks with professional connections and Brown alumni.

Not only did Christian Rome-Lansang, Science and Society ’19, land a highly competitive internship at the Brookings Institution’s Center for Technology Innovation, he co-authored a Brookings’ report, “Global Manufacturing Scorecard: How the U.S. Compares to 18 Other Nations,” with Darrell West, Brookings’ vice president and director of governance studies, director of the Center for Technology Innovation,  and formerly director of Brown’s Taubman Center for Public Policy and the John Hazen White Professor of Public Policy and Political Science. “Honestly, I was blown away to get published at age 20 by the most prestigious think tank in the world,” says Rome-Lansang, a spring 2018 Brown in Washington participant.

The self-described “political nerd” Tim Peltier, Political Science ’19, relished “being in the middle of the action, with news breaking every day” during the same semester. After a summer Capitol Hill internship, Peltier interned for U.S. Senator Elizabeth Warren (D-MA), where he learned more about the issues people deeply care about and their impact on constituents’ daily lives. Seeing Susan Moffitt, director of the Taubman Center for American Politics and Policy and associate professor of political science and international and public affairs –  and his academic adviser –  on an education panel on the Hill “shows the scope of Brown’s impact and influence,” says Peltier, who works part-time on research and policy issues for Rhode Island Governor Gina Raimondo’s Workforce Board. 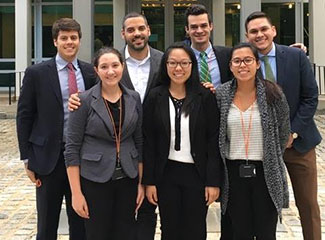 Fall 2017 at the British Embassy

Pamela Reeves ’87, a Brown corporation trustee and a Watson Institute senior fellow in international and public affairs, and Jennifer Klein ’87, also a senior fellow at Watson, co-teach a four-credit seminar, Formulating a New National Security Strategy: The Politics and Policies of Transnational and Cross-Border Issues, that deconstructs the complexities of national security and analyzes how our national security strategy is made. John Tambornino, Ph.D., an adjunct lecturer at Watson and a senior adviser at the White House Office of Management and Budget, teaches a four-credit seminar, Social Policy and Social Justice: Contestation and Compromise, that examines domestic politics and policy by questioning timely social justice issues that range from gender and race to class, community, and citizenship.

Each semester’s cohort of students spends extensive time together, including in classes that “use D.C. as a lab,” says Romano. “These classes could not be taught in Providence. The site visits, guest speakers--who are senior-level experts, many nationally known--and engagement in the D.C. environment help reinforce the issues and develop a professional network.”

“Professors Reeves and Klein are two extremely accomplished women and experts in their field who introduced us to their colleagues,” says Joelle Sherman, Political Science ’19, a spring 2018 program participant. “We had conversations about national security and global politics on a real-life, hands-on level. Getting to talk to and work with practitioners of issues I studied on campus was intellectually fulfilling.”

Participants widely lauded Izetta Autumn Mobley ’03, a fifth-generation Washingtonian, licensed tour guide, and program staff member. Mobley educates program participants about D.C. neighborhoods tourists don't typically visit. The American Studies doctoral candidate, who has worked extensively in the non-profit field, makes an effort to connect policy, history, and the lived experiences of residents of D.C. Mobley teaches participants  about D.C.’s legacy of slavery, segregation, and racism, and about the dynamic history of neighborhoods and landmarks, such as the venerable Union Station.

“D.C. is both the capital of the United States dealing with federal policy and the nexus for international affairs, but it’s also experiencing local policy challenges like any other city,” Romano says. “With Izetta’s knowledge of history and the narratives she put together about the architecture of Union Station, you feel more informed and … [It] helped us have a rooted connection to Washington, D.C., as a city beyond Capitol Hill,” says Sherman, who, like others, called Mobley “amazing.”

Blake DeVaney, Geophysics ’19, found the personal and professional relationships she developed through the program exceptionally rewarding, especially the connection with her alumni mentor, Dr. Elizabeth Cottrell, Ph.D., geologist – curator in charge, rock and ore collections, at the Smithsonian Institution’s National Museum of Natural History. Cottrell ’97, showed DeVaney her geology collections and regularly offers career advice. “The program gives you access to people in a very candid way … and helps you see the possibilities for how you can put your college experience into action,” says DeVaney, a fall ’17 participant who interned at the Bureau of Land Management to “get out of her comfort zone” and learn what types of federal government positions exist for scientists.

This new program is “Brown’s best kept-secret that shouldn’t be a secret,” says Sherman. “There are so many ways to be involved in public service that are not expressly political. People don’t realize what an amazing opportunity this is with the support of the Brown alumni network, the Swearer Center, and the Watson Institute.”

For more information and to apply, visit swearer.brown.edu/biw.