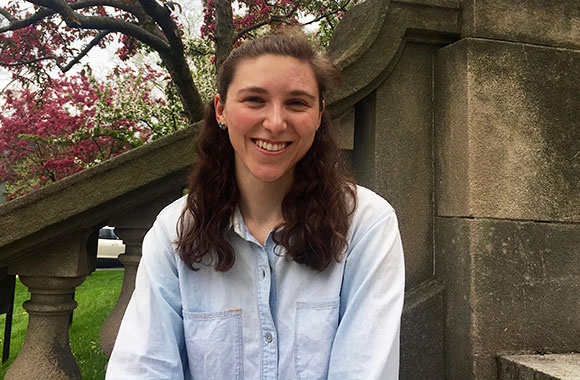 Concentration: Latin American and Caribbean Studies and History of Art

Education: McGill University in Montreal, Quebec, Canada for a master’s degree in history

The Watson Institute’s robust Latin American curriculum and programs motivated you to transfer to Brown University. Why is Latin America so fascinating?

After high school, I took a gap year and traveled through Latin America for six months, including six weeks in Peru. When I returned home, I wanted to learn more about Peru’s pre-Columbian history. I sought to bring that passion to my studies; Bryn Mawr, unlike Brown University, did not have Latin American research that fit my particular interests. I knew Brown had a concentration in Latin American studies; after I learned more about the researchers and professors associated with the Watson Institute’s Center for Latin American and Caribbean Studies (CLACS), I wanted to transfer.

How did you select the topic of your honors thesis, “The Unofficial Iconographies of Mama Huaco: Portraits of the First Coya in Viceregal Peru”? Who was Mama Huaco?

The inspiration came from a writing assignment for a course, History of the Andes. Through my research for the paper, I discovered a painting of Mama Huaco, considered the first Inca queen; that led me to search for more portraits of her, which I used as case studies. I was able to combine both of my interests – Latin America and art history – in this paper.

Mama Huaco may be a mythical, legendary or composite figure; no actual documentary evidence about her exists, as is there is about English royalty, for example. Images of Mama Huaco that I studied are from between 1590 and 1890.

Tell us more about the focus of your research?

In focusing on seven different images and examining an additional 14 images, I tracked the visual continuities in the iconography and symbolism that appeared in these images painted over a 300-year period. I asked: “Why do those visual continuities exist? How are these images from such different times periods connected?” Those consistencies suggest some kind of shared source, but it’s difficult to know what that was. The seven images I focused on are located in Ireland, Denmark, Argentina, the United States and Peru; some are privately held and others in museums. Three images came from written illustrated histories; two of which were painted by famous Peruvian Colonial-era writers and missionaries. Of the other four oil paintings, there was no information identifying the artists or their ethnicity.

A CLACS undergraduate research award enabled me to visit Lima, Peru for four days in January of this year to visit some museum collections. While I saw some images of Mama Huaco, none were of the seven images of my thesis. Nevertheless, it was good to see them in context in Peru, rather than in a museum catalog.

Through the Karen T. Romer Undergraduate Teaching and Research Award, I participated in the Brown University Summer Research Symposium in 2017. My paper, Painting Identity: Portraiture in Colonial Peru, 1600-1824: An Investigation of Ñusta Mamo Ocollo at the Denver Art Museum,” examined Ñusta Mamo Ocollo, which was the name incorporated into the painting, and is an alternative spelling of Mama Huaco. Estimated to have been painted between 1850 and 1890, that picture was one of the seven paintings my thesis concentrated on.

What’s next for you?

I’m talking with my advisors about submitting an article for publication in a journal; I need to do some work this summer to condense the thesis into an article. In the fall, I will attend McGill University in Montreal, Quebec, Canada to pursue a master’s degree in history. After that, I’m considering working in a museum or pursuing a doctorate in history.