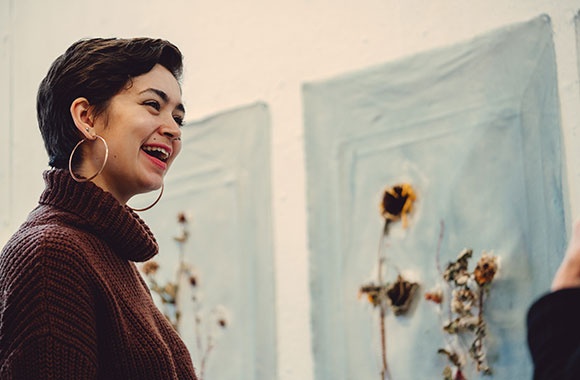 Your piece, “Mirabilis jalapa” received first prize in the exhibition showing on the second floor of the Watson, “The Americas.” What was the inspiration behind this piece?

That piece began with an art history course I took last Spring on Italy and the Mediterranean. My field of art history is modern and contemporary Latin American art — or Latin American and Latino art, which are overlapping but separate — and I really wanted to tie the course back to my specific interests. I was reading into things relating to my final project and learned about cochineal, a beetle that lives on prickly pear cactus and is native only to Central and South America that is used to make a vibrant red dye. It was used extensively by indigenous people, but when Europeans colonized the Americas, they exploited it, turning it into an industry and enslaving people to pick it. So there is this incredible and devastating history behind the material.

I dug around a bit and was able to obtain some cochineal, and I started to play around with the material. The piece turned out to be bright pink, not a deep red that I would love to eventually get it to be. The piece is on muslin and with the dye I painted this vague image that references botanical artist Maria Sibylla Merian. There are a bunch of her amazing drawings in the John Carter Brown Library, including a book of plants from Suriname that she illustrated. The title page to that book has an image of her working on the drawings, but out the window behind her you can see laborers working the land. So that was a moment of slight visibility of the labor behind the harvesting of the natural environment, which tied in to my interest in the materials. In my piece, I vaguely evoked that image, and then dyed yarn that I used to embroider the flowers. This piece is actually one of three in a series, in which the same image is vaguely painted on the back and then they each have a different plant embroidered on them.

I was also interested in the way that indigenous botanical knowledge was colonized. The three plants I picked each have this really strange history in terms of the way that they were renamed by colonizers. The plant on this piece is called mirabilis jalapa, which is a combination of the name Europeans gave it and the indigenous name, so it manages to be a hybrid. Ultimately, there are a lot of layers to the piece, but I would say the overall theme is thinking about the way that knowledge was appropriated, colonized, and transferred — specifically knowledge of the natural world.

You’ve worked in the Center for Latin American and Caribbean studies office since your first semester at Brown. What has that experience been like?

It’s been wonderful. I have worked closely all four years with Kate Goldman, the center manager, who has been lovingly flexible with the amount of time I can commit and very understanding of the fact that I’m a student and how that comes first.

When I was a freshman I went to the concentration fair knowing I was interested in Art history, but since I wanted to focus on Latin American art, I was also looking for Latin American Studies. I didn’t see them at the fair, and I ended up coming into the office at the Watson Institute and chatting with one of the student assistants, who told me they were hiring. I was very lucky! Now I am studying Art History and Visual Art, and I am not actually a Latin American and Caribbean Studies concentrator, so working here has fueled that interest — meeting the many professors and the cycles of students who come through has been very meaningful. I’m so thankful to work at a place that I really enjoy.

In what other ways have you seen your work in the CLACS office influencing your studies?

The Center has been great about bringing people from a wide range of disciplines. For example, my sophomore spring there was a visiting professor, Florencia Malbrán, who taught an art history course on Rio, Mexico City, and Buenos Aires. That class was amazing because it allowed me to think about the art and art scene of these particular cities and working with her so closely that semester really furthered my studies. I’ve found that although the majority of things that occur at the center are along the lines of international relations, political science, or anthropology, they have still made art and art history a priority, which has been really important to me. Everyone has also been very supportive of my work — when I was told a week before the opening of this show that the jurors had anonymously picked my work as first prize, it was such a surreal experience.