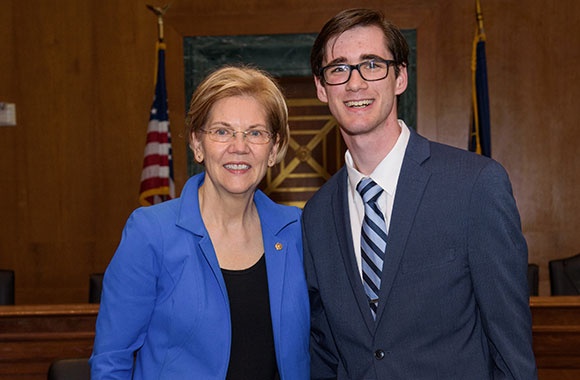 "You can read all about everything happening in the news, but it is entirely different to be in the middle of it all — to have news breaking around you, to watch how congressional offices respond."

Tell us about your time working in Senator Elizabeth Warren’s office last semester with the Brown in Washington program. What did you take away from your internship?

It was an amazing opportunity — Senator Warren is my hero. I think she’s a strong fighter for so many issues like education, labor, consumer protection, and other policies that I care so much about.

The fields that I focus on are labor and education policy, so first of all, what better office to work in. Second of all, working on Capitol Hill is a unique experience because you are in the center of the action. You can read all about everything happening in the news, but it is entirely different to be in the middle of it all — to have news breaking around you, to watch how congressional offices respond. That certainly was one of the highlights of my internship.

During the internship, I was able to work on some things regarding banking policy, including a big bill that would have repealed a lot of Dodd Frank regulations that Senator Warren cared very deeply about and tried her best to stop from passing — I even got to see some of my research show up in a floor speech. I also attended hearings and wrote memos on policies ranging from infrastructure and transportation to refugee resettlement and the impact of climate change on the Olympics.

As Senator Warren is a national figure, the office received a lot of constituent mail from Massachusetts and from around the country. Through that, I was able to see the issues that matter to people, how they respond to events in Washington, and how they receive Senator Warren’s message. The big thing that you hear from people is to always “work for someone that you believe in,” and Senator Warren is that for me.

How did your studies at Brown and within the Watson Institute influence your time in Washington?

My studies at the Watson gave me a really strong grounding of knowledge, so that no matter which hearing I was sent to, I was able to understand what was going on. Beyond that, the analytical skills that I learned, and the discussions that we have in our classes at the Watson, helped me critically evaluate the policies we worked on. My work as a research assistant on the Common Core Standards Team at the Taubman Center gave me research skills so that when it came time to go digging for information I knew where to look, how to do it, and what information was important. I found that so much of what I learned at the Watson was instrumental in allowing me to engage in these policy spheres, and to be well versed in a lot of different areas.

You have been working with the Governor’s Workforce Board  — what has that experience been like?

The internships that I’ve done before in government have been mainly at the federal level — before I worked for Senator Warren I interned for my representative, Congressman Jim McGovern. One thing I noticed was that, by the virtue of being in the minority at the time, a lot of the policies I cared about failed to pass. So, I was interested in seeing how policy works at the state level, and getting that comparison.

I am the Research and Policy Intern, so I’ve learned a lot about the federal and state laws that govern state workforce policy. Most of my projects begin with a “best-practice-scan,” in which I study comparable programs in other states, and that has given me both a state and national perspective. In Rhode Island, Governor Raimondo has been successful in implementing major programs like Real Jobs Rhode Island and Real Skills Rhode Island. These were all designed to create jobs and place people on a career pathway that would enable them to be successful in the new economy, as so many Rhode Islanders have been impacted by the loss of manufacturing jobs in the state over the past 30 years.

The Governor’s Workforce Board implements policy, but it's also constantly thinking about how we can help people to succeed in the new economy. The goal is to provide people with the job-training and credentials that will allow them to get a job in a high-paying, high-demand field. I was empowered to do a lot of work on my own, which was exciting. Over the summer, I worked on designing an internship program for Rhode Island college students that would   incentivise and help students get into advanced industries. One of the benefits of working on policy in a small state like Rhode Island is being able to see the tangible results of the Workforce Board’s efforts, which has been extremely rewarding.